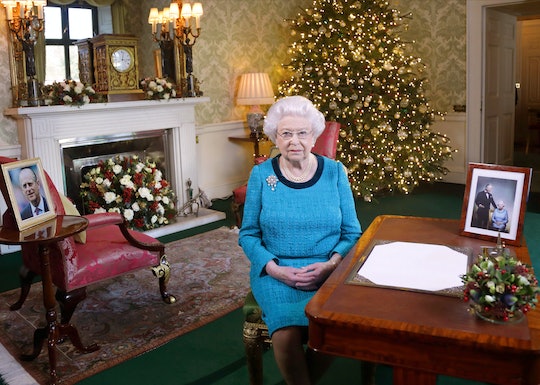 Here's How The Royal Family Celebrates Christmas (Hint: They Do It Big)

The holidays are underway and Meghan Markle is likely deep in her royal training. There are a lot of family traditions to keep up with for every holiday, and Christmas is no different. Markle would have gotten a detailed explanation of how the royal family celebrates Christmas prior to her first holiday at Harry's side, because it's, maybe not-so-surprisingly, a pretty big deal. So, with no further ado, here's a breakdown of their schedule.

A celebration regal enough for the royals takes a while to plan. Roughly a week before Christmas Day, the included family members receive their invitations to the festivities with the Queen and Prince Philip, according to the Mirror. A week may seem like awfully short notice, but Markle found out that she was invited more than a week out, so the family likely knows much earlier than the official invitations go out. Invites and transportation are organized by the Crown Equerry, as well as the time and order of arrival of guests. The Queen is the first to arrive and is followed by other members of her family.

Once everyone knows that they are invited and when to show up, the real fun begins. Between gift exchanges and annual Christmas cards, the royal Christmas celebration might resemble your own traditions — with a few notable exceptions.

Both Christmas and New Year are sent Sandringham House, the Queen's personal country estate in Norfolk, according to The Royal Household website. In the past, the family celebrated at Windsor Castle — the location of choice for the family's Easter celebrations — but they moved the party to Sandringham in 1988 when the castle was being rewired and have kept it there ever since. I guess some traditions are newer than others.

Modern royal Christmases include a decadently decorated tree that the family puts the finishing touches on together. Queen Charlotte was rumored to be the first to introduce Christmas trees to the household sometime during her reign from 1761 to 1818,and they have continued to be in the house ever since, according to the Royal Household. In later years, Queen Victoria and Prince Albert expressed their enthusiasm for the tradition during their reign of 1837 to 1091 and helped them become the norm in the U.K.

The royal family does exchange extravagantly wrapped gifts each year, but with a few quirks. The gifts are laid out on a white-linen table in the home and are opened on Christmas Eve. However, royal commentator Richard Fitzwilliams told Entertainment Tonight that the gifts are more for fun than anything else, saying:

The important thing to remember is that these presents tend to be token. They're a bit of fun. They don't spend money on them. The idea is [that] the family who has everything exchanges amusing gifts.

Fitzwilliams also provided some examples of humorous past presents, including a white leather toilet seat that Princess Anne gave to Prince Charles, and a hat that Prince Harry gave to the Queen that read "Life's A B*tch." Gifts are exchanged at teatime.

Each member of the royal household receives a gift from the Queen, many of which are handed out by hand. The family also donates money to charity around the holidays.

The family eats a full English breakfast together on Christmas Day before heading to St. Mary Magdalene, a country church dating back to the 16th Century that the Queen's great-great grandmother Queen Victoria visited, according to Hello! Magazine. Then it is back to the house for a roast turkey lunch at 1:00 p.m. before the Queen's speech at 3:00 p.m. The evening ends with a buffet-style dinner served by the family instead of the staff.

The Queen and family also send out annual Christmas cards each year featuring the latest family photo — around 750 in total, according to The Royal Household. They are sent to family members and close friends, as well as other members of the British government. They are all signed "Elizabeth R and Philip" and come with their official family seal. The Duke also sends out 200 cards of his own to different regiments and organizations that he is affiliated with.

One final Christmas tradition from the royal family is to give a Christmas pudding to each member of the staff around the holidays. The Queen purchases about 1,500 puddings and hands them out along with a greeting card. This tradition, The Royal Household reports, dates back to the Queen's father King George VI and grandfather George V.

There is a lot of planning and preparation that goes into such a big holiday, but with the royals' busy schedule, I'm sure that they appreciate the family time. Markle certainly has a lot to look forward to.