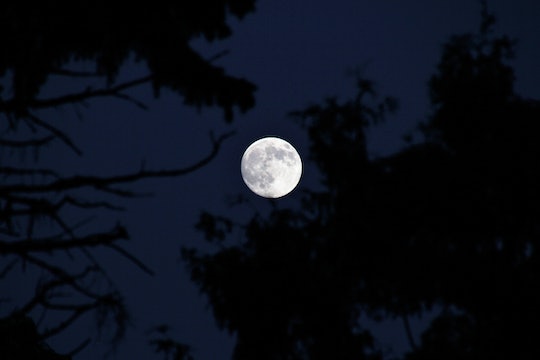 The Full Cold Moon Is Coming, & Here's How Science Says It Will Impact Your Kids

The lore and mystery of the full moon is rife with stories of wild nights and strange occurrences. If you've ever had the chance to talk to a firefighter or cop about the full moon, they'll talk your ear off about it. Is there any truth to the tales, or is it lunacy? Because, as a parent, I'd like a hard pass on anything that might rile my children. With the full cold supermoon around the corner, I'm wondering, how does the supermoon affect your kids?

There is only one supermoon occurring in the whole of 2017, and it happens on Dec. 3 — the year is departing with the Full Cold Moon. While there are superstitions aplenty surrounding the full moon, and the supermoon in particular, there simply isn't any hard truth behind the rumors about erratic behavior surrounding the once monthly occurrence. A longitudinal study completed 10 years ago in Warsaw, Poland looked at patterns of human behavior and their relation to the lunar cycle, and found there are marked changes on patterns of fertility, and to a much lesser extent, sleep and the circadian rhythm. It's not going to make your child howl at the moon, so to speak.

The Full Cold Moon, also known as The Moon Before Yule, and The Long Night Moon, is the name for the full moon of December. This year, the full moon is also a supermoon, which is a special astronomic occurrence that happens alongside what's known as a perigree. The fun term essentially means "near the earth," according to Weather.com. When the moon and the earth are closer than they are the rest of the year, it makes the moon appear larger and brighter to the human eye — leading to all sorts of superstitions about mischief and childbirth and animal behavior.

If that's the case, how does the supermoon affect your kids? While there is some very thin research that suggests there might be some effect on children's sleep patterns due to the full or supermoon, noted The Weather Channel, it's thready at best. They're more likely to be awed by the beauty of a full moon they're fully awake to see. Think about it, the moon will be fully risen before 6:30 p.m. on Dec. 3. This is an opportunity to take them out and look at something that's so unique and beautiful, even if it's something they can experience over and over again. Children are naturally curious creatures, and how great is it to seize this opportunity to grab some cocoa, throw on some mittens and hats, and go view the moon with them.

You could talk to them about how Galileo thought that he could make use of the technology employed by eyeglasses to view the heavens when he invented the telescope. You could tell them how he proved the Copernican hypothesis that the earth revolved around the sun. I mean, you might want to leave out that bit about the church finding him guilty of heresy and confining him to house arrest for the remainder of his life, but you do you.

Alternatively, if your child is more into folklore, you could tell them about the druidic ritual of oak and mistletoe that sent men to cut mistletoe from oak branches at the full moon to be used in poultices and ancient fertility medications. Again, I'd leave out the bit about the ritual sacrificing of the white bulls and the spilling of blood — moon stuff apparently gets violent — but you do you.

If all else fails, you could just tell them it's made of cheese and sing them the song from American Tail until they ask you to please be quiet, and remain confident that the supermoon isn't going to make them any more loud, or quiet, with its moon mojo.