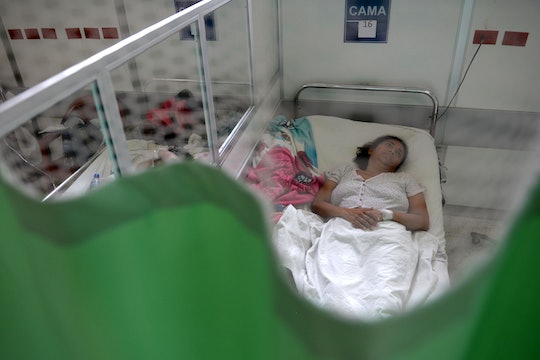 How Does Zika Cause Paralysis? The Virus Is Linked To A Serious Neurological Syndrome

By now, most people are aware of the devastating effects of the mosquito-borne Zika virus on unborn babies. Pregnant women who have contracted the virus have a significantly higher likelihood of giving birth to a child with a severe form of the birth defect microcephaly, which restricts brain growth and, ultimately, development. But the more researchers are learning about the virus, the more it seems clear that pregnant women aren't the only ones who should be worried: according to Science Magazine, the virus can cause concerning neurological complications — like paralysis — in adults, too. How does Zika cause paralysis? In some people, contracting the Zika virus can cause them to later develop Guillain-Barré syndrome (GBS). And while GBS-induced paralysis is most often temporary, it can also be permanent, and in some cases, life-threatening.

While the Zika virus is still not likely to be particularly dangerous for most healthy adults (most people infected won't even know it), some people who contract Zika will end up suffering from GBS once their initial Zika symptoms have passed. Why? It all comes down to how your body reacts to the virus. According to Science Magazine, some people who get Zika will develop an autoimmune response that attacks their own nerve cells, leading to "sudden numbness and weakness in their limbs" in the weeks following their initial symptoms. While GBS is usually temporary — 80 percent of patients can walk unassisted again after six months — in about 5 percent of cases, the paralysis will affect the patient's ability to breathe, which can lead to death.

In a study published in The Lancet in April, researchers looked at the increased occurrence of GBS cases during an outbreak of the Zika virus in French Polynesia between October 2013 and April 2014. What they found, according to The New York Times, is that almost 90 percent of the GBS patients in the study "reported Zika-like symptoms four to 10 days before they started to notice neurological problems."

One of the study's senior authors, Dr. Arnaud Fontanet, commented on the findings and the likelihood that Zika can be linked to GBS:

If you put all this evidence together, for me, as an epidemiologist, I’m satisfied that Zika virus caused Guillain-Barré in those patients.

And he's not the only one who thinks that. While there was some trepidation to confirm that there is a causal relationship between Zika and GBS (people can develop GBS for a number of different reasons that have nothing to do with Zika), according to CNN, the World Health Organization has since announced that Zika does in fact cause both microcephaly and Guillain-Barré, noting that:

based on a growing body of preliminary research, there is scientific consensus that Zika virus is a cause of microcephaly and Guillain-Barré syndrome.

So what do you need to know about your risk of developing Zika-related Guillain-Barré syndrome as the U.S. prepares for its own Zika outbreak this summer? Well, the good news is, there are treatment options available for GBS if you do contract it. According to Science Magazine, GBS patients can be treated with immunoglobulin (a mix of antibodies) to try and block the virus, or with plasma exchange therapy. Unfortunately, there is no way of necessarily preventing GBS in the first place, other than, well, just trying not to get the Zika virus. So physical therapy will also be an important component of treatment for those with GBS, as they will have to work to overcome some of the damage of their paralysis.

Without a vaccine, or a sure-fire way of preventing a Zika outbreak on a large scale, the best option for most Americans this summer will likely be personal prevention measures. That includes the regular use of bug spray with DEET; covering up exposed skin as much as possible; staying indoors with air conditioning, or behind window screens; and using condoms during sex to prevent sexually-transmitted Zika cases. And individuals who do contract Zika (as many are expected to do) should be aware of symptoms for the few weeks following and should seek medical attention as soon as possible.