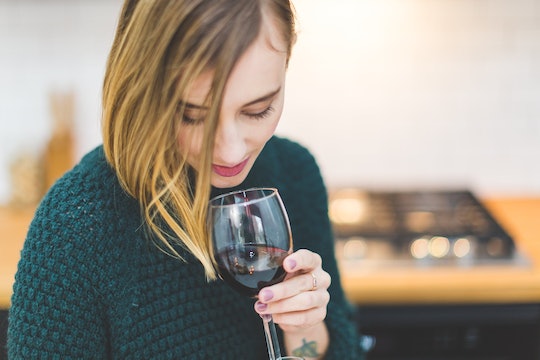 Trying to conceive is really stressful. It seems like something that should be the most fun in the world, right? I mean, it's basically guaranteed sex over and over again with the hopes of creating a tiny person that's both you and your partner. It's an amazing concept, yet stressful. It makes sense you'd want a beer or glass of wine to take the edge off, but is it safe? Have you wondered how drinking on the day you conceive affects your baby? Does it affect something that was literally just created?

There really isn't any research available about what the consequences are of drinking on the day of conception — in a vacuum. That is to say, if you have been drinking, drank on the day of conception, and then ceased imbibing any alcohol the day after that. This is because it would not be sanctioned by the FDA, and because only about 50 percent of pregnancies are actually planned.

The data would be very complicated to engineer, and difficult to corroborate. However, there is a lot of science about the possible complications of drinking while pregnant, and according to the American College of Obstetrics and Gynecology, drinking any alcohol at all simply isn't worth the risk. The organization suggested teetotaling the entire time you are trying to conceive, if only out of an abundance of caution.

The Centers for Disease Control and Prevention (CDC) takes it a step farther, and ends up ticking off a lot of women in the process. Their official stance is that all women who aren't on regular birth control, but who are able to get pregnant, should abstain from ingesting alcoholic beverages entirely due to the possible risks to the fetus. No, they did not make it exclusive to a sexual orientation that might result in pregnancy with intercourse or exclude celibate versus non-celibate women. Needless to say, it sparked some outrage, and it was a tad extreme.

However, the dangers of fetal alcohol syndrome (FAS) are real and terrifying. FAS can cause myriad problems for the developing fetus, ranging from developmental delays, physiological malformations, and some things you wouldn't expect, according to the CDC. Children born with FAS are shorter than otherwise healthy babies, they could have a lower IQ, and there are problems with speech and language delays. Your child could have a hearing problem or a vision problem, or even problems with their kidneys and liver. It's difficult, at least for me, to wrap my brain around all that can happen to a developing fetus with even a small exposure to alcohol, but that is what the CDC has contended for many years.

However, studies have found that women who are trying to conceive are actually prone to drink a bit more than women who aren't trying to get pregnant. I totally get that. I've been there several times. Trying to get pregnant is stressful AF. It is especially stressful for women like me, women who struggle to get pregnant. At times, it has taken me years to get pregnant. I've had to use Clomid and progesterone. I've had IVF and IUI and gotten pregnant the old fashioned way. (Quickly, while my other child napped.) I went against the CDC, and I drank. From the day I got my period, until the day my home ovulation kit said I was ovulating, I bellied up to the bar, because I was hoping my belly would soon do more than that, and when it didn't, it was really rough going.

Also, because I love beer and wine. It's delicious, and it's a part of the social fabric of my community. But I did stop drinking during the two week wait, and that sucked. Not just because you want a beer when you're watching The Oscars or whatever, but because that's the most stressful time during TTC.

Even if we don't know how drinking on the day you conceive affects your baby, we do know that drinking while pregnant isn't a good idea, and now you have something more to consider before you pop the cork.