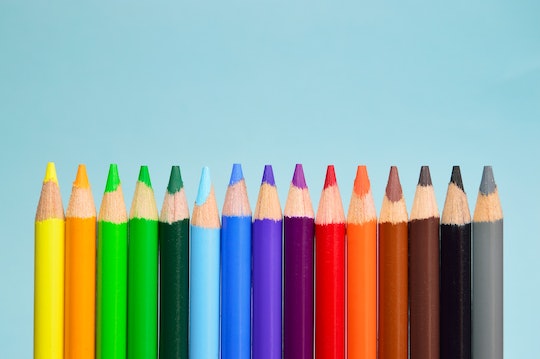 How Eliminating The NEA Would Affect Our Kids

In a new report, president-elect Donald Trump continues to make announcements regarding his White House plans, this time featuring budget cuts that would completely eliminate one of the longest-running federal agencies devoted to the arts in our nation's history. In case that doesn't already sound bad enough, consider how eliminating the National Endowment for the Arts would affect kids' education.

The National Endowment For The Arts (NEA) was established by Congress in 1965 with the intention to help Americans participate in and invest themselves in creative endeavors. NEA's contributions to public television helped to produce some of the most beloved children's television shows of all time (think Sesame Street), and its grant programs for schools have supported arts education throughout the U.S. since its inception.

NEA also offers grants for individuals and organizations: over $30 million in grants has been budgeted for fiscal year 2017. Its overall budget for all of its funding and programming isn't stable from one year to the next: in the last couple of decades it's varied greatly.

President-elect Trump, however, doesn't seem to think that money's destined to be well-spent. In a report from The Hill that outlined much of the dramatic cuts the Trump team plans to make when he takes office, funding for the NEA was eliminated entirely. The Corporation for Public Broadcasting, another familiar entity to those who grew up watching public television, would then be privatized, according to the team's plan.

This isn't the first time the NEA has been under attack by republicans, though: Reagan tried to cut it during his administration, and throughout the 1990s its budget was reduced. Of course, it's worth noting that even if the Trump team proposed cutting the NEA, it would have to be approved by Congress — which is where the NEA originated more than 50 years ago. It would probably be a tough sell, but given how much has already been voted on in terms of massive budget cuts, it's not out of the realm of possibility. Together, with changes proposed to education, the dissolution of NEA could bring about a crisis for students and teachers at public schools.

Public schools throughout the U.S. rely heavily on government funding to enrich the lives of students across all disciplines — not just the arts. When schools are struggling to stay within their budgets, arts programs are often the first to be cut — ahead of sports and other extracurricular activities — because their academic worth has often been the subject of debate. But research shows that the arts help kids become better readers and writers, and certainly encourages the development of creativity — an attribute that is of lifelong value, regardless of who you are or what you do.

Still, that argument has rarely been enough to keep arts programs in school supported, either at the local or federal level. Fine and performing arts are often seen as non-essential, and the cuts often begin at the elementary school level. This can have devastating and long-lasting effects on kids who have begun to develop their artistic talents, found an identity in them, and often times are motivated to remain an active participant in their education and communities because of such programs.

In fact, there's no proof that cutting music and art from schools successfully redirects kids toward pursuits schools deem more "worthy," like math and science. In fact, one study from the NEA showed that low-income students who had access to arts education were more likely to graduate from college than the kids who didn't. They also found that kids who participated in the arts were more likely to volunteer and be engaged in their community than kids who didn't. In today's world, an enjoyment of civic duty shouldn't be underestimated.

While NEA's funding, not unlike the fate of arts' education at public schools, has always been potentially on the chopping block, the proposed cuts by Trump's team would be unlike any that have come up before. The complete removal of the funding would jeopardize not just schools, but would threaten hundreds of artist and writer residencies, performing art centers, dance companies, and post-secondary education programs that rely on their funding.

While the political focus seems to be on saving government money through the cutting of such programs, the arts have always influenced economic growth — domestically and abroad — through the making of films, books, video games, and advertising. In 2013, arts and cultural production contributed $704 billion to the U.S. economy, and for many successful writers, artists, filmmakers, and creative professionals, their first introduction to their craft was in the classroom. Whether that will be a compelling enough argument for Congress to save the program they created, however, remains to be seen.