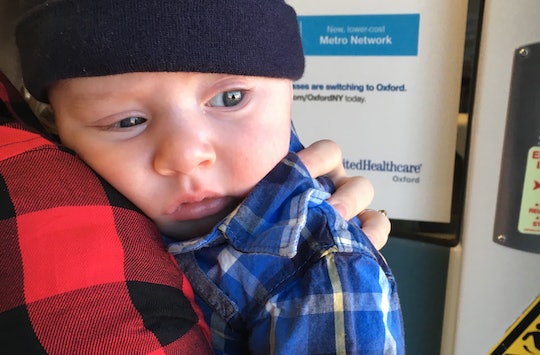 I Tried An Elimination Diet, & It Saved Breastfeeding For Me

If you would have told me two years ago that in the future I would be breastfeeding a 15-month-old, I would have told you to get the eff out of here. Before becoming a parent, I thought breastfeeding past infancy was weird and creepy and couldn’t fathom why anyone would be doing it. Then I became a mom and found myself trying an elimination diet to keep breastfeeding my son.

I was up all night with a newborn, could not have any coffee, and was surviving on ground turkey, potatoes and zucchini.

My son came into this world a shriveled little purple ball of tears and the only thing that seemed to calm him was being close to me. I wore him all day in a sling and if I dared try to put him down he would scream until picked him back up. Sometimes I would be trapped on the couch for hours while he slept and nursed on and off for what seemed like forever. I honestly did not even understand how one tiny human could even consume so much. Those first few months were so overwhelming and all-consuming. We found out he had a tongue tie and lip tie that needed correcting, and after that he started to show symptoms of reflux and a food allergy/intolerance.

After visiting our pediatrician, then a gastroenterologist, and consulting with a few different lactation consultants, I went on an elimination diet.

I basically eliminated everything that could potentially be irritating his little belly. Coffee, chocolate, dairy, soy, wheat — you name it, I didn’t eat it. I could have eliminated one food at a time, but I felt like that would have taken too long and I was desperate to have my son feel better. At the peak of the elimination diet I was not eating: dairy, soy, wheat, gluten, beef, nuts, eggs and legumes. So, I was up all night with a newborn, could not have any coffee, and was surviving on ground turkey, potatoes and zucchini. I kept telling myself that things would get better, that I just needed to stick it out.

It exacerbated the sense of loneliness that new moms can feel, because I couldn’t even share a meal with friends and family.

Although it sounds insane, you don’t give up all these things forever. On an elimination diet, you remove whatever allergens you think are affecting your baby until their symptoms subside (usually six to eight weeks) and then you slowly add them back in one at a time and monitor your baby’s reactions. The most common foods that cause issues for babies are dairy and soy, but many babies react to eggs, wheat, and other foods.

The first few weeks were really tough. I was hungry all the time and I felt like I lost a connection with the social aspect of food. It exacerbated the sense of loneliness that new moms can feel, because I couldn’t even share a meal with friends and family. I started this process just before Thanksgiving, so watching everyone else eat was a tad bit torturous, but my husband was super supportive and tried his best to make me something yummy.

To complicate matters, formula wasn’t really an option for us because the only formula my little guy could tolerate costs $50 a can and our insurance wouldn’t cover it so I felt like an elimination diet was my only option. Three months came and then I told myself to make it to six months. When my son was five months old, after two months of an elimination diet, I added wheat back into my diet. After wheat I added in eggs and I kept adding foods back in from there, one at time for a week or so and monitored for reactions. I found that dairy and soy still caused my son to experience some unpleasant symptoms, so I still avoid those things.

At 15 months, I have managed to add back back in all the food groups I originally eliminated, except dairy and soy.

We got into a groove and, even with a restricted diet, life (and breastfeeding) became a lot easier. At 15 months, I have managed to add back back in all the food groups I originally eliminated, except dairy and soy. I have learned so much about our food system and reading labels from this journey. It can be overwhelming and seem so daunting, but after a while it becomes second nature. I can now drink copious amounts of coffee and regularly eat a pint of dairy free ice cream in one sitting.

It was really important to me to continue to breastfeed my son, despite all the obstacles we faced. Not only did it seem like the most natural choice, but it beats heating up a bottle in the middle of the night. Plus, those snoozy newborn nursing cuddles are some of my fondest memories of our first few weeks together.

Any parent knows that life both seems to stand still and at the same time fly by once you have a child. Before I knew it my son was a year old — the time when many parents who are still nursing choose to wean. The thing is, I have been home with my son, he never really drank from a bottle except for a few times here or there — so I was not going to just suddenly start giving him a bottle at age one. He still cannot have any dairy products and I had tried every kind of almond milk on the market, but he just was not having any of it. He also wasn’t drinking much water, so we just kept on nursing. I felt good about the fact that since his diet is limited, he at least had breastmilk to fill in the gaps nutritionally, and his pediatrician agreed. Additionally, the World Health Organization recommends breastfeeding “up to age two and beyond” so I can’t be that far off base here.

There is so much pressure put on moms today to breastfeed. I saw the catch phrase “breast is best” on a formula website of all places — I found my way there on one of those days when I wanted to throw in the breastfeeding towel. What nobody tells you is that once your baby becomes a toddler, people suddenly start being less supportive about breastfeeding. They start asking you questions about when you will be “done.” You start to get weird looks while your toddler signs “milk” and hops into your lap in the middle of the museum. Suddenly it’s as though after a year what was once “best” is now just weird.

Like so many issues in parenting, this one is not so black and white.

The truth is, it’s not as simple as just being “done.” Maybe for some people it is, — but for us, it’s not. Nursing not only serves as a nutritional insurance policy for my son right now, but it is also his comfort, his tantrum tamer and the only thing he knows. Would I love to stop breastfeeding? Absolutely. Would I like to be able to order and consume an entire Pizza Hut pizza and side of breadsticks entirely by myself? Of course! Would I love wearing a shirt that isn’t a v-neck or button down or some other variation that allows an instant boob whip out? You bet. But, like so many issues in parenting, this one is not so black and white. Eventually my son will find comfort outside of me, eventually I will be away from him for longer periods of time and he won’t have unlimited access to me and my boobs anymore. Eventually I will get to wear whatever I want, eat whatever I want, and have my body back to myself. But for now, this is our life. We are the ones living it and as messy and overwhelming as it can be, I would not change a thing.

At the end of the day, all parents are doing what they think is best for their child and their family and this is what worked for us. Whether you choose to breastfeed or bottle feed, you need to do what feels best for you and what works for your family. There is so much judgment out there surrounding breastmilk versus formula. Rather than judging someone else’s choices we need to support one another because this shit is hard, and making someone feel bad about their parenting choices does not make it any easier. So, moms out there making it work however you see fit for you and your littles, I see you, and I support you.