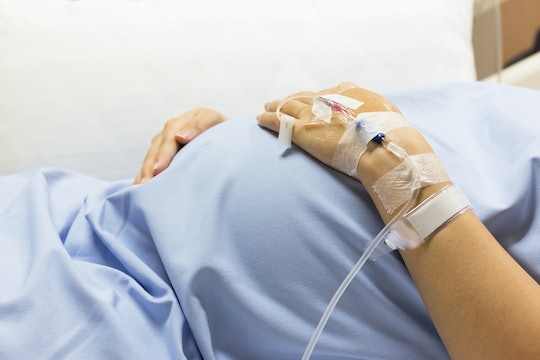 Here's How Your Brain Might React To An Epidural, According To An Expert

When I first became pregnant, I was gripped with fear and anxiety over childbirth. At the time, the fervor around "natural childbirth" was at an all-time high, and everywhere you looked, women were being told that the only good childbirth was an unmedicated childbirth. I took the classes and went through hours of excruciating labor and birth, but when I was pregnant with number two, I think I asked for an epidural when I was about six months pregnant. I wasn't messing around. But I was still worried. I didn't know how an epidural affects your brain or any of the other potential side effects. I'd only heard negative stories up to that point, so I found myself researching them like mad and asking loads of questions.

Within the past few years, there has been a surprising amount of research completed on the subject. What the research has found is that while there are potential risks associated with epidural, there are also potential benefits that are pretty surprising. Yes, there is a real risk for brain involvement during the course of an epidural in the form of a seizure, noted the University of Denver. However, these seizures are exceedingly rare, and you shouldn't let your fear of this outcome prevent you from receiving the pain relief you desire. As to the benefits, there is significant research that supports the idea that women who receive an epidural during childbirth have better outcomes in regards to postpartum depression, according to a study published in Obstetric Anesthesia Digest.

I spoke with Dr James Lozada, Obstetric Anesthesiologist at Northwestern University Feinberg School of Medicine, to find out how your brain might react to an epidural. He tells Romper, "Seizure following epidural placement is exceedingly rare. It must be separated from other causes of seizure during pregnancy, including eclampsia." This means that the seizure might not find its locus in the epidural itself, but as the result of another issue entirely, like high blood pressure.

For his part, Lozada is completely aware of the risks, and doesn't skirt around them, however, he says, "My goal is to help women have the labor experience they choose, and to ensure the safety of them and their baby. Rapid progress in the field of obstetric anesthesia during the last 10 years has allowed physician anesthesiologists to offer epidural analgesia that is safe, effective, and provides the best method of pain control during labor and delivery." It's the best because it's both the most effective and considered one of the safest.

Sure, you can't feel your feet, but who needs those in the face of screaming pain in your abdomen and vagina? Having done it both ways, I am basically an epidural's number one fan. If I could write a sonnet, I would.

According to Lozada, there are minimal risks to your brain from the administration of an epidural, but about 1 in 144 women will develop something known as a PDPH or postdural puncture headache. It's a possible complication that arises when there is leakage of the spinal fluid into the bloodstream post-epidural placement. According to Lozada, "the most common symptoms are nausea, vomiting and neck stiffness." He goes on to note that "it is worse with sitting and standing, and improves with lying down." Thankfully, "this headache resolves in 75 percent of people within seven days, if untreated" and that there are interventions available to treat it beyond the acetaminophen usually prescribed for this postural headache.

There's also something you don't hear about as often, notes Lozada, and that's called epidural impairment. “After I place an epidural, I estimate seven in 10 women fall asleep before I leave the room. Sometimes they wake up, feeling bad for dozing off. I tell them, it’s the best time to get some rest, then try to sneak out quietly,” he says. This is likely due to the rapid pain relief that causes your body to relax, and as a general side effect of the meds.

Side note: this did not happen to me, and I wish it had. I wound up blabbering to my anesthesiologist about how I would totally marry her if I wasn't already married to the dude who knocked me up. How embarrassing in hindsight, but she said it wasn't even her first proposal of the day, so maybe that's a side effect no one is exploring — happy spewing of the mouth at the angel of medicine.

While the risks are scary, they're slim. And the pain? Well, if you're anything like me (and apparently 72 percent of women are just like me), the benefits far outweigh the risks, even if the only benefit is pain relief during childbirth. Being educated about the risks is still important, and it's good to do the reading. Unlike childbirth, what could it hurt?