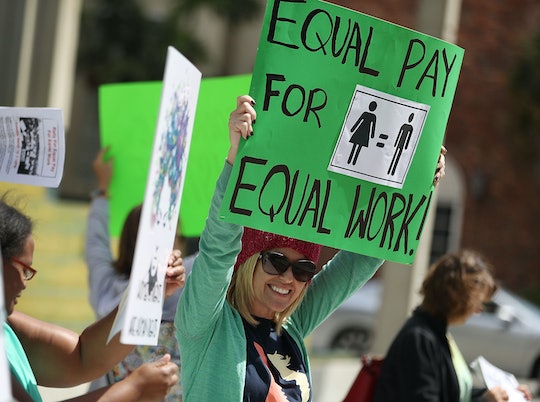 Despite the continued push for progress and gender equality, it's not exactly a secret that there is still a big imbalance between women and men. One area in which the disparity is painfully clear? The gender wage gap. This year, April 4 marks Equal Pay Day, a day that represents how much further into 2017 the average American woman would have to work to earn as much as the average American man did in 2016. On average, women make 82 cents on a man's dollar, according to Fortune, but the truth is that that's actually a pretty optimistic estimate. If you are non-white, or if you have kids, you can expect to earn even less. Wondering how Equal Pay Day affects mothers? It's not even sort of fair, but women take a big hit in the earning potential when they have children.

For more than 20 years, Equal Pay Day has worked to raise public awareness about the gender wage gap, by helping to contextualize what it really means to earn less for the same work. It's one thing, for example, to hear the statistic about 82 cents on the dollar, but it's another to realize that women basically have to work an extra three months to catch up to men, earnings-wise. It's not the only way to put the gap into perspective though: according to the National Committee on Pay Equity (aka, the group behind Equal Pay Day), the day always occurs on a Tuesday to represent the fact that women have to work two days into the next week to earn the same, on average, as a man did the week before (sigh).

Unfortunately, as disappointing as those figures are, they also don't even sort of paint the entire picture. While American women in general can expect to earn 82 cents for every dollar that men earn, Black, Native, and Latina women usually earn even less. According to a recent fact sheet released by the National Women's Law Center, Black women earn, on average, only 63 cents, while Native and Latina women earn even less, at 58 cents and 54 cents respectively. The only anomaly? Asian women, who actually fare better than the gender average, earning approximately 85 cents on the dollar of white, non-Hispanic males.

Want more bad news? Even though April 4 seems like a pretty long time to wait for gender wage parity, the reality is that, if you have kids, you actually have to wait even longer. That's because, according to the American Association of University Women (AAUW), Equal Pay Day for working moms doesn't actually occur until May 23 this year. And when you take racial disparity into account, that date gets pushed back even further — to July 31 for Black women, Sept. 21 for Native women, and Nov. 2 for Latina women (aka, almost an entire extra year of work compared to men).

Unsurprisingly, these differences really add up. According to CNN, the gender pay gap translates into a loss of around $10,470 in median earnings a year for women. But when women become mothers, their careers suffer even more. According to The New York Times, women's earnings generally tend to decrease, on average, by about 4 percent for each child they have. And if a woman with children is hired for a new job? She is likely to be offered about $13,000 less on average than men with children to do the same job, and would be more likely to be held "to harsher performance standards" by their bosses. According to Fortune, mothers are also more likely to be seen as having "lower competence and commitment" not only compared to men, but compared to childless women, and are less likely to be hired and promoted.

Being a woman without children might give you a bit of an advantage, but studies have shown that even childless women are held back by the "motherhood penalty" if they are of child-bearing age (and thus, could potentially one day have children), according to New York Magazine. That's because, even though their performance may not currently be affected by family responsibilities, the implicit assumption is that they could eventually have children and become less dedicated to their work, or that they could leave all together in favor of full-time caregiving.

Unfair? You bet. But as American Association of University Women Policy Advisor Lisa Maatz, explained to NBC News, the bias against women in the workplace is based in part by the outdated notions of gender that remain pervasive society:

This kind of discrimination is institutionalized. It's a part of the culture, it's a part of the decision-making process. Right now the assumptions about women's roles, as stereotypical as they may be, are driving decisions and those decisions disadvantage women.

And just in case there was any doubt about whether or not parenthood in general could be to blame for mothers' decreased income potential, it's worth noting that studies have found that the motherhood penalty really is women-specific. According to Business Insider, not only are men's incomes not hurt by parenthood, men actually see increases in their earning potential once they have children, so long as they live with them. In her research, University of Massachusetts, Amherst sociology professor Michelle Budig found that, on average, men earn more than 6 percent more after they have children, especially if they're white, college-educated, and already earn a good salary to begin with. The exception? Black fathers, who statistically see no increase in their salary at all in relation to having children, even if they are also college-educated and earning well.

If you're a woman, and especially if you're a mother, then none of this is particularly good news. But it's also why days like Equal Pay Day matter so much — if we aren't even aware of the obstacles we are facing, there is no way to overcome them. Even though gender equity is something that should be advanced everyday, April 4 is a good time to start talking about the gender wage gap. And we should keep talking until the gap finally closes.

More Like This
Ginger Zee Had A Perfect Response After A Troll Asked Her "Who's Raising Your Kids?"
Why It's Crucial to Get Good Sleep As A New Mom — Plus, Tips On How To Do It
It's A Beautiful Day In Jenny Slate’s Neighborhood
These Boys Saved Their Dad From Drowning With CPR They Learned From The Sandlot