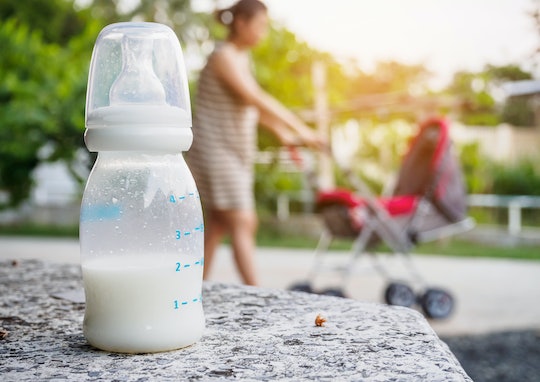 Here's How Expensive It Is To Buy Donated Breast Milk

Breast milk is called "liquid gold" for a reason my friends, and not just because the title is catchy. From the antibodies that help your baby fight off viruses to the relatively low cost of breastfeeding, breast milk is the preferred choice for a number of new moms and for a variety of reasons. But if nursing isn't possible, for either personal or medical reasons, breast milk doesn't have to be completely off the menu. How expensive is it to buy donated breast milk, though? And perhaps more importantly, is it safe to purchase breast milk? While there are banks available where you can get your hands on screened, safe human milk to offer your baby, there are a few things you should be aware of before you make your purchase.

A report in the journal of Breastfeeding Medicine found that the costs of providing donor human milk (DHM) to premature babies in the NICU can be high, citing the cost per NICU infant ranged from $27 to $590. According to Wired, the asking price for breast milk bought via the website Only the Breast runs $1 to $2.50 an ounce. For reference, a 6-month-old baby consumes about 30 ounces in a day, according to What To Expect. In other words, the cost of breast milk isn't necessarily cheap, especially for low income women.

What To Expect explains the process for donating breast milk, so that perhaps the cost can be offset by the peace of mind women can enjoy, knowing the breast milk they're purchasing is safe. Women are extensively screened and have to commit to donating a minimum amount. Donors are banned from smoking or drinking to excess and require a doctors approval prior to making their breast milk available to those in need.

So because banks test, screen, and pasteurize the milk before it can be sold, it can be expensive. What to Expect reported on Ohio prices of $4.25 an ounce, averaging a cost of between $85 and $128 per day. These costs can sometimes be covered by health insurance, so it's worthwhile to consult your health insurance to see if the cost of obtaining breast milk would be eradicated thanks to your specific health care plan.

It is important to note that the American Academy of Pediatrics (AAP) does warn parents about purchasing breast milk via the internet, citing instances in which cow's milk contaminated human milk purchased online. The AAP reported the following:

"Because buyers cannot verify the composition of milk they purchase, all should be aware that it might be adulterated with cow’s milk. Pediatricians should be aware of the online market for human milk and the potential risks."

There are, of course, other alternatives to purchasing breast milk. There are numerous donor banks made available to women who cannot (and/or choose not) to breastfeed, but want to feed their babies breast milk. According to What To Expect, there are over 20 nonprofit milk banks across the United States, all part of the umbrella Human Milk Banking Association of America (HMBANA). These nonprofit banks, according to What To Expect, have a priority list of babies and moms, giving milk to those who need it most. First are premature babies and sick, hospitalized infants. Second on the list are sick babies who are no longer in the hospital, but failing to thrive or suffering from some other condition. And of course, fed and healthy babies come last.

NPR recently reported on a growing trend of mothers sharing their breast milk via online communities and to no cost to the moms needing breast milk. "The goal is for women to share milk without being paid. Sometimes mothers receiving donated milk offer to pay for milk bottles," reported NPR. It is worth mentioning, of course, that both the Food and Drug Administration (FDA) and the AAP don't support this breast milk sharing phenomenon, citing informal breast milk sharing puts babies at risk for HIV, hepatitis B, and other infectious diseases.

And last but not least, according to the Mayo Clinic formula is "just fine for healthy babies who have typical dietary needs." In the end and always, how you go about feeding your baby is entirely up to you. All that matters is that they're being fed.