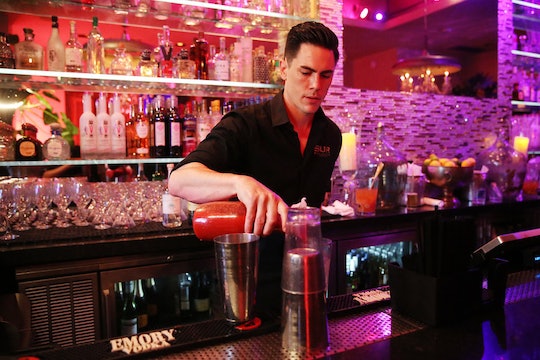 Here's What You Need To Know About TomTom From 'Vanderpump Rules'

The seventh season of Vanderpump Rules has partially revolved around the opening of TomTom, a bar run by Tom Sandoval and Tom Schwartz, funded by Lisa Vanderpump herself. Getting the bar ready for the public was a lengthy process with occasional setbacks, but now it's open for business. You can pop by any time you're in the area and get a glimpse for yourself. But if you're contemplating dropping by, you might be wondering: how expensive is TomTom in L.A.?

A quick look through the cocktail, wine, and dinner menus on their official website indicates that food and drink at TomTom range from the relatively cheap to the rather expensive. At their cheapest, a TomTom cocktail can run you $14 — for a "Kentucky Muffin" (which contains Kentucky bourbon, wildflower honey, fresh lemon, ginger beer, champagne, and bee pollen) or a "Tom Fashioned," their twist on an Old Fashioned. The most expensive cocktail caps out at $17, and there are two offerings at that price point: the "Matcha Bucha" (gin, matcha, lemon, ginger liqueur, ginger agave Cointreau, and kombucha) and the "Daddy Diablo" (Buzz Button, tequila, ginger liqeur, Crème de Cassis, lime, fresh ginger, thyme, and ginger beer. Say "ginger" again).

It's certainly pricey for a single drink, but anyone living in a major city is probably nodding sadly at the reality of it. However, there are plenty of other options at TomTom that won't break the bank.

They also have beer and wine available, though costs vary depending on what you get. A beer could cost you $8, and a single glass of wine runs from $13 to $28 (for Veuve Cliquot Rosé). Bottles are typically more expensive, and TomTom has offerings at a few different price points. You can treat yourself to a bottle of 2016 Ridge Zinfandel for $51, or you can go wild with a $450 bottle of Dom Perignon Rosé. Personally, I'd probably go for the Zinfandel. Kidding! I would have a glass of $6 Barefoot Rosé at home.

When to comes to food, there are even more options, most of which are well under $30 (though there are a few items that cost more than that). All of the "nibbles and snacks," which include green olives with jalapeño aioli and spicy cauliflower wings, are under $20. Most of the entrees are the same, whether you're interested in shrimp jicama tacos or Lisa's vegan rigatoni. The most costly food includes a grilled hanger steak for $34 and nine-piece brioche Kobe sliders for $41.

The collaboration between Lisa, Sandoval, and Schwartz was a long time in the making; she first offered them the opportunity to go into business together back in Season 5. Now TomTom stands near two of her other restaurants, Pump and, of course, the iconic Sur. "I'm reeling and overjoyed, it's a dream come true and I'm afraid I'm gonna wake up," Schwartz told the Observer ahead of TomTom's Aug. 9 opening. "It's a confluence of fortunate events, just meeting Sandoval on Craigslist on a whim and now starting a restaurant with Lisa Vanderpump."

It's certainly been a journey getting TomTom off the ground, as Vanderpump Rules has dutifully documented. But now fans can drop by to check it out for themselves next time they're in the neighborhood.