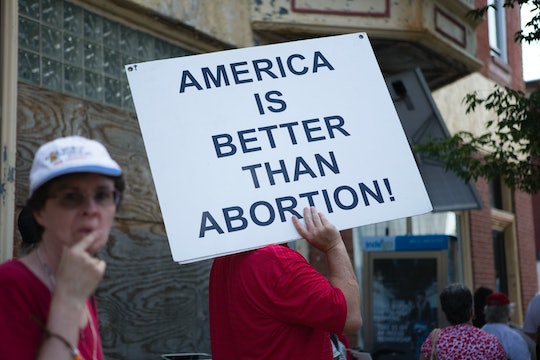 Fake news has worked its way into many places in the past couple of years: not only has it multiplied on sites like Facebook and Twitter, it has also influenced elections and caused media companies to start scrambling for solutions. But fake news has also been alive and well elsewhere for some time, and it's causing considerable damage. According to New York Magazine, fake news is hurting women's health — and that's something we need to turn around immediately.

Fake facts in general are already baked into the policies regarding women's reproductive health in several states. In 38 states, abortion providers are forced to give women information selected by legislators (not scientists or physicians) about the procedure, then send women away to reflect on that information for 24 hours before allowing them to proceed with an abortion. According to Broadly, the consent materials often contain incorrect information, such as links between abortion and suicide, infertility, and breast cancer.

The House of Representatives passed the Pain-Capable Unborn Child Protection Act in 2013, banning any abortions after 20 weeks' gestation in 2013 based on the argument that this is when fetuses can feel pain. But according to a scientific review by the Journal of the American Medical Association, fetuses are unlikely to feel pain prior to the third trimester, or — at the very least — around 24 weeks' gestation. An entire bill affecting women's reproductive health passed the House of Representatives based on a single study largely discounted by the scientific community. A law in Utah requires women undergo anesthesia, for the fetus' sake, if they pursue an abortion at 20 weeks.

If all of that makes you shudder, that's understandable. Luckily, there are groups that are actively working against the steady diffusion of misinformation into politics governing women's bodies. Groups such as Physicians for Reproductive Health aim to influence policy by presenting medically sound information to both lawmakers and the public. And on Tuesday, a political action group launched STEM the Divide, an initiative to try and get more scientists involved in politics.

"There's nothing in our Constitution that says we can only be governed by attorneys," founder Shaughnessy Naughton, a scientist who has tried to run for Congress herself, told The Washington Post. "Especially now, we need people with scientific backgrounds that are used to looking at the facts and forming an opinion based on the facts."

For individuals who aren't scientists or physicians but do want to fight against the proliferation of discredited science in politics, make sure you keep track of reproductive rights in your state, call your senators when those rights are being attacked, and support pro-choice organizations — like Planned Parenthood and NARAL. Because after all, if fake news doesn't belong on people's Facebook news feeds, it certainly doesn't belong in women's healthcare.