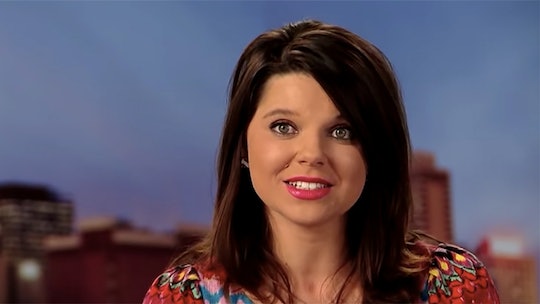 Although Counting On is currently on a break, the Duggar family is busier than ever these days. In fact, it seems like every time fans turn around, yet another Duggar announcing a pregnancy. It can be difficult to keep track of who is expecting and when, even if you are an avid follower of the couples and family members on Instagram. As one Duggar pregnancy is nearing its due date, so many be wondering how far along Amy Duggar is now and when she'll welcome the ever-expanding family's newest addition.

Amy — the daughter of Jim Bob's sister, Deanna — is known as the spunky and decidedly more mainstream Duggar cousin. She embraces wearing pants, having a career, and pre-marital physical contact, and birth control, all of which are things Michelle and Jim Bob discourage their daughters from taking part in. And in case you missed the big news, Amy is currently expecting her first child with husband Dillon King They couple announced in April that they're expecting their first child, according to Us Weekly. “We are completely speechless, overly excited and ready for the next chapter as new parents!” Amy and Dillon told People at the time.

And on Tuesday, Aug. 20, the mom-to-be shared a pregnancy update with her Instagram followers. In the process, Amy also revealed how far along she currently is. "Don't eat the seeds!!" she captioned a photo of herself holding slices of watermelon in each hand while sporting a colorful tank top. Amy also included the hashtag #33weeks.

So adorable! I'm convinced Amy is going to be such a fun mama.

Just for funsies, let's take a look back at Amy's weekly bump photos so far. Her first one was posted on Instagram on May 16, "I see you little bump!! 19 weeks today!!" she captioned the shot.

A week later, she shared another bump photo that marked the halfway point of her pregnancy — with help from Bon Jovi lyrics. "Oooohh we're half way there," a chalkboard in the photo read. The expecting mom captioned her Instagram post with, "20 weeks today!!! #octoberbaby Someone finish the song! ;)."

It wasn't long after that bump photo that Amy and Dillon announced the sex of her baby. "It's a boy! I’ve always wanted to be a boy mom! Dillon builds lifted trucks, so I can just imagine how suped-up the Power Wheels will be,” Amy told People. “We just can’t wait for this little ball of energy to arrive!”

Amy marked the beginning of her third trimester (28 weeks) with a photoshoot on the beach.

And she marked 31 weeks with a bump photo inside her boutique, which is in the process of getting renovated.

Her 32-week bump photo took place at a premiere party.

Seriously, though. Can you believe Amy only has seven more weeks to go until she meets her baby boy? Although the expectant parents haven't shared her due date with fans, it isn't too difficult to figure out when Baby King might make his big entrance. If she really was 33 weeks on Tuesday, that puts Amy's due date on Oct. 8. (Granted, the odds of her baby actually coming on their due date are pretty slim.)

Even if Amy ends up going into labor a little early or late, one thing's for sure: Baby King will be here before fans know it!