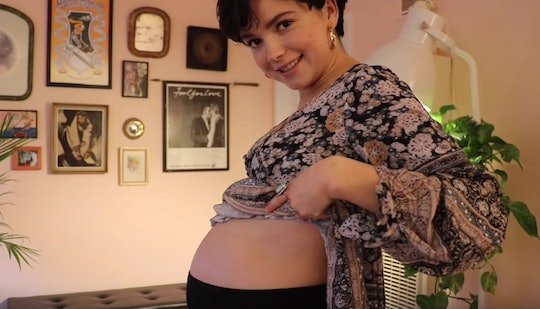 If anyone is a testament to how much can change in a year, it's Bekah Martinez, who starred in Season 22 of The Bachelor. After the show aired on New Year's Day last year, Martinez's life has changed so much. Most notably, she's expecting her first child very soon. Of course members of Bachelor Nation are probably dying to know: How far along is Bekah Martinez now?

One day after the newest season of The Bachelor premiered, Martinez took to Instagram, where she shared a photo of herself from the premiere episode of Season 22 of The Bachelor, side by side with a picture of her now. It's clear to everyone that some things have definitely changed since then.

In the photo, Martinez can be seen wearing the same exact choker as she was wearing a year ago, but her body has changed just a bit. After all, she's expecting her first child with her boyfriend, Grayston Leonard. Martinez highlighted in the caption of her photo how time really does fly.

"A lot can change in a year...face and belly are a little plumper, hearts a little fuller (but excitement still makes me excited to be alive)," Martinez wrote.

"You are GLOWING," one wrote.

"Girl...how are you still pregnant," another remarked. "It seems like you've been pregnant forever."

Martinez first announced her pregnancy in early September, telling PureWow that becoming a mom and getting pregnant was "legitimately a dream come true." She told the site, "I think pregnancy is better than Bachelor in Paradise. Although I'm probably equally as sweaty, exhausted, nervous, stressed out, and emotional, at least I don't have to worry about finding a man. I already have that one covered."

At the time, Martinez told PureWow that her baby was due at the end of January, and her baby could be here any week now. In Martinez's newest Instagram post, on Wednesday, she revealed that she is currently 37 weeks along and is so ready to become a mom.

"Baby is coming soon and I can't believe it's gone so fast," Martinez wrote.

And during her 36-week update, which she shared on Instagram last week, Martinez said that her baby could be delivered any time within the next 40 days, meaning that she'll be a mom either by the end of the month or early February.

During her time on The Bachelor, people thought that the then-22-year-old nanny was a little too young to be competing on the show, according to Us Weekly. And her age was the center of attention for a few episodes of The Bachelor.

But, Martinez proved to everyone that age is something that doesn't determine a person's preparedness for major life changes. And if Martinez's bump update has shown anything, it's that she is so ready and prepared to become a mother. And that is going to happen within a matter of weeks.