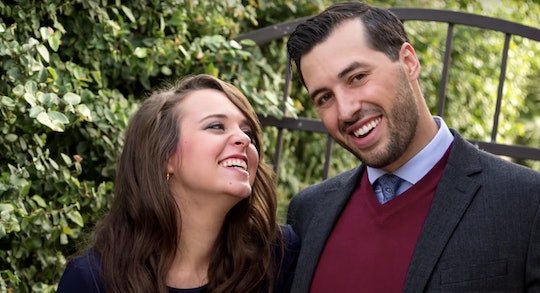 The Duggar family just keeps counting on. When the world first met the Duggars, Jim Bob and Michelle were running a household of 17, 18 and then 19 children. Over the past decade that they've been documenting their extraordinary lives on TV, fans have gotten to watch as the older Duggar siblings grow up and start families of their own. One of the latest Duggar girls to do that is Jinger, who married Jeremy Vuolo in the fall of 2016. The couple announced their pregnancy at the beginning of this year, and she's been keeping her fans somewhat in the loop when it comes to her pregnancy milestones. Now that it's been a few months since she announced her exciting news, how far along is Jinger Duggar now? Well, if her Instagram posts are accurate, her first child will be here before you know it.

On Jan. 3, according to People, the couple took to their website to share that they were expecting. “The past fourteen months have been the best of our lives as we have had the wonderful privilege of beginning our journey through life together in marriage," they wrote at the time, according to People. "Now, the journey has taken an exciting turn: we are expecting our first child! We are praising God for this beautiful gift and ask that you join us in praying for a safe and healthy pregnancy."

A few months later, in April, TLC reported that the couple learned they were expecting a baby girl, and announced it to the world via a light up sign which read "BABY" in pink. "We are so happy to announce that we are having a BABY GIRL! We could not be more excited and are eagerly anticipating meeting our little lady this summer," they wrote on their website, according to E! News.

Fans paying close attention will notice that they mentioned they'd be meeting their daughter this summer, and given that it's already mid to late June, it could mean that Jinger is actually very close to giving birth. Everything does seem to line up: when the couple announced that they were pregnant, they didn't yet know the sex of the baby, which means that at the time, Jinger was probably less than 16 weeks along (that's the time at which you can find out a baby's sex, according to Parents). That was all confirmed as Jinger has been keeping fans updated on her pregnancy milestones, and on June 6, she posted a photo to Instagram announcing that she was 34 weeks pregnant, according to In Touch Weekly, which means she's just about 36 weeks along at the time of publication.

If Jinger does carry her daughter to 40 or so weeks (the average length of a pregnancy), that means she will most likely deliver sometime between mid July and early August. However, if the baby comes even sooner than that, the world could be meeting the newest Vuolo within the next few days or weeks.

Regardless of when their baby girl arrives, Jinger and Jeremy have made it clear that they are really, really excited to be parents. In the video that revealed Jinger's pregnancy, which was posted by TLC, she said: "I think we're most looking forward to just having this little one in our arms and being parents — and learning how to multi-task. That's going to be fun." She's also revealed at least part of her birth plan. According to In Touch Weekly, she said:

I want my mom definitely at the birth of our child and so I've invited her and Jana as well and Jill, she wants to make it. So they're invited, but I don't know how many will be able to make it. My mom, at this point, is the only one who's probably going to be able to make it for the birth.

With just a few more weeks to go before all of the Duggar women meet the newest baby Vuolo, it will be exciting to see how it all plays out.