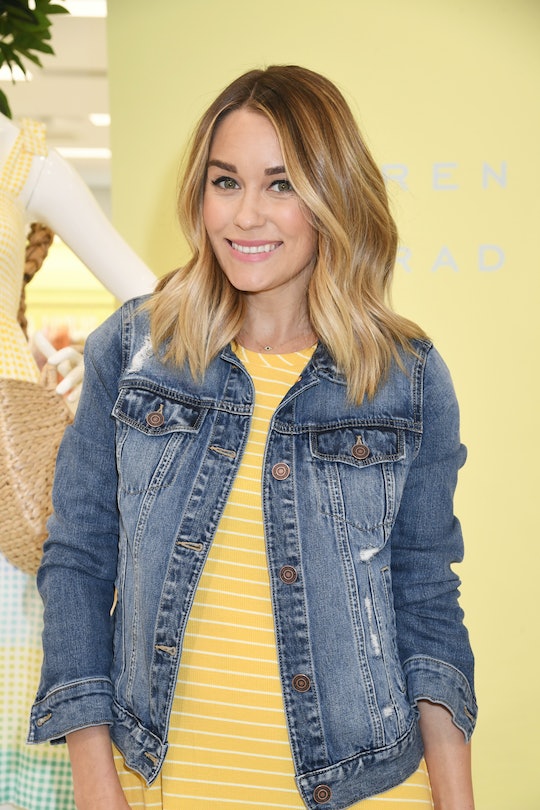 Lauren Conrad and husband William Tell are expecting their second child together, and fans couldn't be more excited for them. The pair announced the happy news in April, but didn't reveal when the child is expected to make his or her arrival. This, of course, has led fans to wonder how far along Lauren Conrad is with her second child now, especially after the former The Hills star shared a little information about the early days of her pregnancy this time around.

Although the soon-to-be mother of two hasn't confirmed her due date yet, she did reveal in an Instagram post that she was in her first trimester during the last photo shoot for her LC Lauren Conrad fashion line. In the Instagram post, she shared that she struggled to hide her growing bump, which was more prominent at the time than it was with her first baby. The 33-year-old fashion designer included two photos in the post: the one the company posted on social media, which largely hid Conrad's bump from view, and one she had snapped on her phone that put it on full display.

"I wasn't comfortable sharing my news with everyone yet so what would normally be a big production turned into a few members of my wonderful team in my backyard," she wrote on Instagram. "Between finding the right angles and strategically [placing] bags we were able to get the shoot done. Seeing these photos makes me feel so lucky to work with people that are not only talented, but dear friends..."

It's unclear when exactly the photos were taken, but Conrad's reveal that she was in her first trimester is a major clue. She first confirmed that she was pregnant with her second child in April, as reported by Entertainment Tonight. And because people typically wait until the second trimester to announce a pregnancy — that period begins at about week 14, or the third month, according to What to Expect — that seems to suggest that Conrad perhaps got pregnant in January or December. As of mid-May, that would place her at about five or six months along at this point, possibly making her due date sometime in September or October.

Conrad's first child, a son named Liam James, was born on July 5, 2017, according to People. The former reality star talked a little about his arrival with People, revealing that she went into labor after a Fourth of July party at her and Tell's home. According to her interview with the magazine, Conrad told her husband before the party that she was sure the baby wasn't coming any time soon, so she wanted to proceed with the festivities. She had gone to bed before her husband, and as soon as he laid down it was go-time.

"I felt so bad because it was such a long day," she recalled to People in 2017. "William came in an hour later, and as soon as his head hit the pillow, my water broke."

Conrad and Tell's son will celebrate his second birthday this summer, and of course, it will be his last birthday celebration as an only child.

Fans are thrilled Conrad and Tell are expecting another baby, and can't wait to watch him or her grow with the already-adorable little family on Instagram. And with her due date a few months away, it won't be long before Baby #2 is here, and the excitement is building fast.