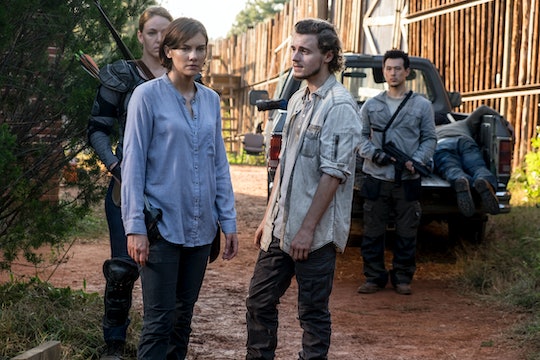 How Far Along Is Maggie On 'The Walking Dead'? Fans Are Getting Impatient

It was all the way back in Season 6 when we learned that Maggie was pregnant with Glenn's baby. So now that Season 8 is almost over, fans are starting to wonder how far along Maggie is on the Walking Dead since she hasn't had the baby yet, and well, it's been two years. When you add in the fact that showrunner Scott M. Gimple told Entertainment Weekly that Season 8 won't even show her having the baby, it's worth wondering whether this post-apocalyptic universe does a number on a woman's reproductive system or something. Or if the writers just forgot about this very important plot point or something.

Luckily, it's not as dire as some fans on Twitter might think. Remember, Maggie revealed her pregnancy at the end of Season 6, but the timeline of Season 7 was just about 19 days and Season 8 started a couple of days after that.

Although it feels like Negan's been around for years and years (and you have the memes and GIFs to prove it), it's only been weeks since he killed Glenn. Using this timeline, Maggie's only about two months along, give or take a few days or weeks since it's not like she can go get an ultrasound or anything to confirm it. So, it's going to be a while.

Unfortunately, patience is not one of the Walking Dead's fans best character traits.

Lauren Cohan understands that it's frustrating. Fans finish one season, wait an entire year for another to start and it's hard to wrap your head around the timeline. Even though we might know deep in our fangirl hearts what's happening in the show, our brains just can't catch up. Cohan gets us. Cohan said in an interview with Entertainment Weekly:

I always want to put a little ticker tape along the bottom of the episode saying how far into the apocalypse and into the pregnancy we are. Because I’m playing newly pregnant for a really long time. But the truth of the matter is, it’s only been a matter of weeks since Negan killed Glenn.

I think that ticker is a genius idea. If not on the screen, at least on Twitter or something, right? Other cast members get frustrated by the timeline, too, sometimes. Josh McDermitt, who plays Eugene, told CombicBook.com that he sees the fans complaining on Twitter. He said, "I hear some fans say 'This is bulls---, Maggie's not even showing,' Well, she's like two months along, chill out! Just because it's been a year and a half in your world, this is... It is hard."

Time is moving at a walker's pace on the show, and it doesn't appear that it's going to speed up anytime soon. I mean, Season 7 was just 19 days.And Gimple has made it very clear that he's going by the comic books when it comes to Maggie's pregnancy. "It's quite early in, as it was in the book," he said, according to PopSugar. Which means that unless something drastic happens in the next few episodes to close out Season 8, or there's a huge time jump next season, prepare to keep schooling your friends on Twitter about Maggie's pregnancy timeline and how it's only been about two months.

In any case, what's going on in Maggie's uterus is hardly the most important thing about her character this season, according to Cohan herself. She told Interview Magazine that Season 8 is when Maggie undergoes some big changes. (And we know it's not all due to her pregnancy, since she's barely even been through it yet.) Cohan said of Season 8 Maggie:

I think this season I see some of the biggest changes in her. She’s had to become hardened, not because that’s what the world requires, but … I’d say there’s been a pretty constant perseverance and optimism for Maggie, and this year she has to make really hard decisions. I don’t know if they will permanently change her, but they are definitely showing a very different side of what this world requires you to be.

Which means that even if we don't get any baby bump action or her going into labor some Sunday night soon, there's a lot happening with Maggie. All in good time, people, all in good time.