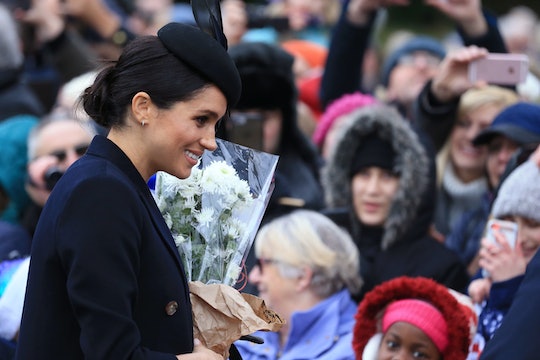 As soon as famous women announce a pregnancy, everyone jumps on "bump watch," and I hate how even such a personal thing as a pregnancy bump can become another way to judge or critique women. That being said, the question of just how far along Meghan Markle is has been a bit of a riddle for months, but the duchess may have just hinted at her due date.

The young royals were all together to spend the holiday with the Queen at her private residence, Sandringham Estate, in Norfolk, England, where it has been the Windsor tradition to spend winter holidays, according to Town & Country. The magazine also noted that the family first acquired the sprawling estate in 1862.

This year, as the younger royals walked to services and greeted locals, however, Markle, the Duchess of Sussex, answered one amateur photographer's inquiries about her pregnancy, Hello! noted.

"We're nearly there," Markle told local single mom and photographer Karen Anvil and her daughter Rachel on Christmas Day, after they asked her if she was excited, according to Hello!, with the magazine adding that the photographer's take on the comment was "that sounds soon to me."

This latest news echoes previous reports that Kensington Palace's original announcement of a Sussex baby in "Spring 2019" has a little wiggle room built in.

The Daily Mirror reported that, with lots of people questioning what "Spring" means, it can actually encompass dates between March and June. At that rate, Markle may be right on track for a very early-springtime delivery.

Yet, while fans initially assumed the news that Markle's 12-week "all-clear" ultrasound had occurred when the announcement was officially made in October (after Princess Eugenie's wedding and before Harry and Meghan's trip to Australia and New Zealand, as the The Sun noted), it's possible everyone's timing has just been a bit off.

For evidence, you only have to look as far as the Duchess's own comments. The Sun reported in another story that when Markle met the residents of the Royal Variety retirement home in Twickenham, England, earlier this month, she joked she was feeling "very pregnant today." That's a comment typically said in the later stages, but again, who knows.

And don't forget another early clue that supports the idea a royal baby will be here in the not-too-distant future: During the October tour, Aussie singer and mom Missy Higgins posted her excitement about meeting the Duchess... including the statement that "I felt sorry for her having to do all these meet-and-greets while 4 months pregnant!"

Meaning Meghan might be a full month ahead of schedule... unless Higgins was just "guess-timating" the Markle's due date, which could totally be the case.

And while it's ridiculous and demeaning to speculate on bump size, as all moms-to-be carry differently, it seems as though most everyone is super-excited about this baby.

Whether baby Sussex ends up being born in late February or early April, it's all good to me. And single mom Anvil, who got the comment out of Meghan regarding her due date to begin with, is the same local resident who shot the famous picture of the "fab four" last year, when Markle was spending her first Christmas with her soon-to-be family.

As the Daily Mail reported, Anvil's cute shot of the couples, taken on her phone, allegedly earned enough to pay off debts and do some renovations around her house. So Harry and Meghan's good news has been exciting for everyone.