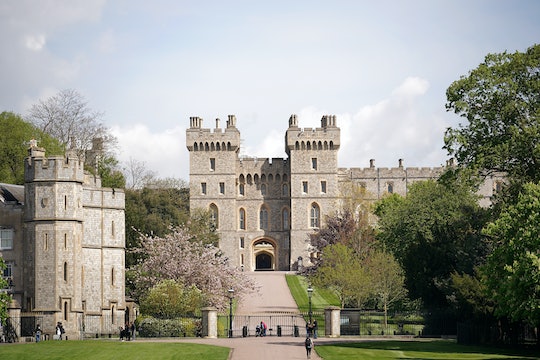 How Far Is The Palace From The Church? Prince Harry & Meghan Markle Left In Advance

The royal wedding may have dominated the headlines ever since Prince Harry and Meghan Markle announced their engagement in November but now, the big day has finally arrived. It's an event that is being watched and celebrated at viewing parties around the world, and since many of the meticulously-planned details of the day were shared in advance, we already have a reasonable idea of what to expect and when. For one, the couple is expected to take part in a procession following the ceremony, but how far is the palace from the church? Prince Harry and Markle will be married in St. George's Chapel at Windsor Castle, and will then have their reception at the nearby St. George's Hall, according to Town & Country. But they chose a wedding venue a bit further out from central London than the Duke and Duchess of Cambridge did on their wedding day: Windsor Castle is about an hour's drive away from the couple's home at Kensington Palace.

Like many couples, Prince Harry and Markle opted to spend the night before their wedding apart, with Prince Harry's press secretary confirming that he (alongside best man, Prince William) would be "[arriving] at St George's Chapel most likely by foot." Yet it seems safe to assume he didn't actually walk from his hotel: Prince Harry and Prince William spent the night before the wedding at Coworth Park, according to Harper's Bazaar, which is about a 15 minute drive from Windsor Castle. As for Markle? She and her mother, Doria Ragland, arrived Friday to spend the night at Cliveden House, much like Kate Middleton, who spent the night before her 2011 wedding with her mother and sister at London's The Goring Hotel.

Although getting to the wedding venue may have been a bit more involved, the fact that the ceremony and the reception are both taking place at Windsor Castle makes things pretty straightforward. But since the public obviously wants as much of an opportunity to see the newlyweds as possible, the couple is actually scheduled to take a 25-minute procession that will leave from Windsor Castle, and then bring them back again.

The wedding ceremony is officially set to begin at 12:00 p.m. local time, according to The Telegraph, where the couple will be married at St. George's Chapel in front of about 600 guests by the Dean of Windsor and the Archbishop of Canterbury. One hour later, they will take a carriage ride through town before returning back to the castle grounds.

The good news for anyone who had their heart set on staking out a prime spot along the procession route? The palace released the details well in advance. According to The Telegraph, the couple will leave the chapel and proceed down Castle Hill, onto the High Street and into the town center, before returning back to the castle via the Long Walk. And just so the thousands of spectators don't miss any of the action, the ceremony is set to be broadcast live on screens that have been set up for the crowd.

In addition to the bride and groom, fans will be no doubt eager to catch a glimpse of Prince George and Princess Charlotte, who will be serving as a page boy and flower girl, according to The Sun. Unfortunately, their little brother, Prince Louis, will be absent from the festivities: while the Duchess of Cambridge is expected to attend the wedding along with the Duke, who is serving as Prince Harry's best man, their infant son will be cared for at home by a nanny (which, given the pressure of the event, seems like a wise choice).

Of course, with such a high-profile event, all the details for today's wedding have no doubt already been ironed out well in advance, and there are many, many people involved to ensure the day will go off without a hitch. And that means that both the ceremony, and the royal procession in Windsor, are almost certainly going to be as fun to watch as we've all been expecting.