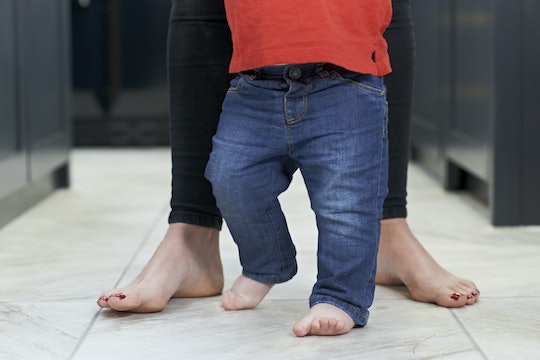 If You're Constantly Buying Shoes For Your Kids, Here's Why

Sometimes I feel like no matter which shoes I pick out for my 2-year-old daughter, I am either going to be squeezing her toes into sneakers that are a bit too small, or watching her flop around in sandals that are half a size too big. It’s tough to find kids’ shoes that fit well, especially when they go from a chubby baby to a lanky toddler seemingly overnight. But how fast do your kids feet grow?

"It's really hard to predict the growth of children's feet, and impractical to do so," says Dr. Barbara Bergin, a board-certified orthopedic surgeon in Austin, Texas, in an email interview with Romper. "Suffice it to say that children's feet are going to grow, some of them quite large."

As for guidelines, Bergin says girls pretty much stop growing once they start menstruation, whereas boys continue to grow into their early 20s. "But as a parent, I remember really having to keep up with foot growth while they were in middle school," she adds.

According to Bergin, while children's foot growth doesn't seem to have much clinical importance, it is important for children to wear shoes that fit. She explains that wearing tight shoes can have long term clinical implications, especially in girls, who tend to wear tight shoes and high heels. Combine too-tight footwear with some genetic predispositions, and Bergin says foot deformities, like bunions, hammertoes, and bunionettes, may result.

"This all starts early, and then as adults — when we're able to make our own bad decisions — we continue to fan the fire," she says.

Bergin says the good news is that footwear options are becoming expansive, and include stylish sneakers and supportive flats that can be worn throughout the day, including those designed for kids.

Now if moms could just get them to stop throwing them in the middle of the living room, then everyone would be set, am I right?

More Like This
17 Best Potty Training Products For Toddlers
From Captions To Gifts, These Are All The Kindergarten Graduation Ideas You Need
Fun Ways To Celebrate National School Nurse Day
34 Instagram Captions Perfect For Preschool Graduation Photos