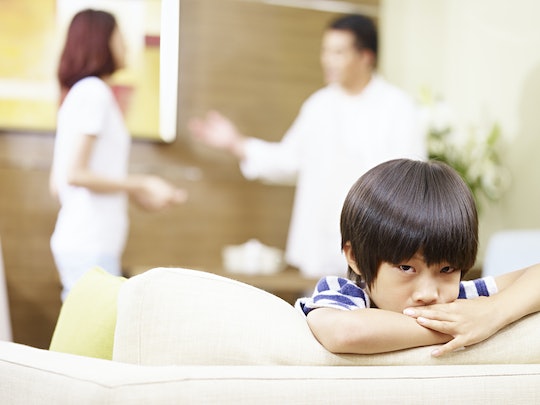 How Fighting In Front Of Your Kids Could Affect Them Later In Life, According To This New Study

Fighting is normal and inevitable in even the healthiest relationships, but it's also just as normal and inevitable that parents worry about how fighting in front of their kids can affect them later in life. A new study from the University of Vermont released this week shows that there might be a good reason to reign in how much you argue with your partner, at least in front of your kids. While there's a multitude of research about how physical violence and abuse affects children, this particular study examined how non-violent conflict — like verbally arguing in the kitchen about bills or chores — can change how kids perceive everyday interactions.

The study, published in the Journal of Social and Personal Relationships, studied 99 kids between the ages of 9 and 11 years old. The kids were divided into groups after going through a psychological assessment where the researchers scored how much parental conflict the kids were experiencing regularly and how much the kids thought that conflict threatened their parents' marriages.

The kids were then asked to look at a bunch of photographs of couples in happy, angry, and neutral interactions and then asked to put them into the right category. Across the board, according to a press release about the study in Medical Xpress, the children who were from "low conflict" homes correctly identified the category in which the photos fit. The ones from "high conflict" homes, who also saw conflict as a threat, were good at accurately identifying the "happy" and "angry" photos. But they had trouble figuring out where the neutral pictures went.

The researchers thought that there might be a few reasons for this. Either it was that kids were made to be hypervigilant if they're always around conflict, so that the neutral poses in the pictures (and possibly out in the real world) just always seem like angry ones to them. Or, it could mean that neutral parental interactions just barely registered for the kids. If you're always on the lookout for a conflict that will threaten your parents' marriage, for example, it's not even worth registering the neutral ones.

Alice Schermerhorn, an assistant professor in the University of Vermont's Department of Psychological Sciences, a lead author on the study, said in the same Medical Xpress press release:

They may be more tuned into angry interactions, which could be a cue for them to retreat to their room, or happy ones, which could signal that their parents are available to them. Neutral interactions don't offer much information, so they may not value them or learn to recognize them.

She added, "The message is clear: even low-level adversity like parental conflict isn't good for kids," since both of the conclusions could lead to problems later in life for how children interact with others, whether it be a teacher, a friend on the playground, and later, their adult relationships. Schermerhorn added:

One the one hand, being over-vigilant and anxious can be destabilizing in many different ways. On the other, correctly reading neutral interactions may not be important for children who live in high conflict homes, but that gap in their perceptual inventory could be damaging in subsequent experiences with, for example, teachers, peers, and partners in romantic relationships.

The study also gathered data from parents about how shy they would score their children before showing the kids the pictures. The study found that the shyer kids from high conflict homes had the most trouble deciphering between the happy, angry, and neutral parental interaction photos. So parents should be especially careful about the levels of conflict in the house if there's a shy kid in the room.

Of course, fights and conflict happen to all parents. There's even some research, like a 2009 study done by the University of Rochester and Notre Dame, that found that conflict can teach kids how to have their own, just as inevitable, fights in life.

For example, parents who fight "constructively" and demonstrate healthy arguing habits, such as showing that conflicts can be resolved with compromise and don't necessarily threaten the love between two people, can actually be alright for children. A 2017 study from the University of Arizona, as Offspring reported, also found that managing how you and your partner handle conflict is important for a child's well-being and social skills development.

So you're not going to scar your child for life by bickering about whether or not your mother-in-law is invited for the holidays. But remembering to bring some moderation into the game — like waiting until they're out of earshot or even just talking to kids after a big blowout, explaining that grandma isn't going to bring about a divorce — is just as important as making up with your partner after a fight.