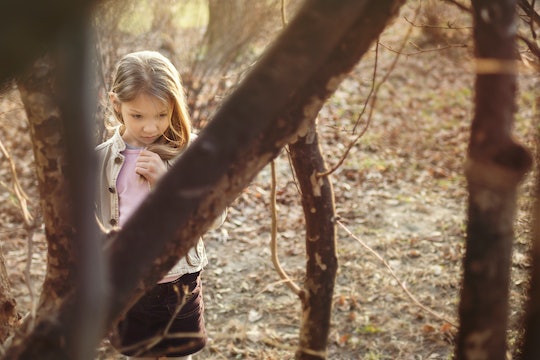 How Getting Lost Affects Your Kid Later In Life

As a parent, losing your kid in a park or mall seems like one of the most terrifying situations. Not only do the immediate dangers of having a lost kid make you freak out, but you're not alone in wondering how getting lost affects your kid later in life. This isn't something any parent wants to think about, but it's a topic that's necessary to give some thought.

According to studies published by the National Child Traumatic Stress Network (NCTSN), the impact of getting lost as a kid depends on how stressful the incident was. In other words, like most things, the trauma that can result from getting lost exists on a spectrum. The same study noted that parents and caregivers should not underestimate the significance of early childhood experiences a kid has in growing up and learning about the world. Kids crave stability and reliability, and tend to flourish in a well-ordered environment, noted PBS. But kids get lost sometimes, because, well, they're kids, no matter how well-ordered your environment is.

According to Parents, beginning when your child is a toddler, you should talk about the possibility of getting lost with your child and develop a plan for if you get physically separated. As for the long term effects this separation will have on your kid, the NCTSN emphasized that children start to develop ideas about trust and safety at an early age from their experiences in the world:

Through relationships with important attachment figures, children learn to trust others, regulate their emotions, and interact with the world; they develop a sense of the world as safe or unsafe, and come to understand their own value as individuals.

The same article in Parents, referenced a 2005 report by the Department of Justice that estimated that some 340,500 children a year become temporarily separated from a parent or a caregiver for at least an hour. So, temporarily losing sight of your kid is not that uncommon. The same article encouraged parents to role-play getting lost with their kids in order to prepare for an unfortunate incident, and potentially lessen the impact getting lost might have on your kid later in life.

Another article in Parents outlined several plans on what to do if your kid gets lost. Most importantly, the article noted how important it is that you tell your kid that you will never intentionally leave him or her. This will undoubtedly help your kid understand their own value in your life, and in the world if the unthinkable happens.