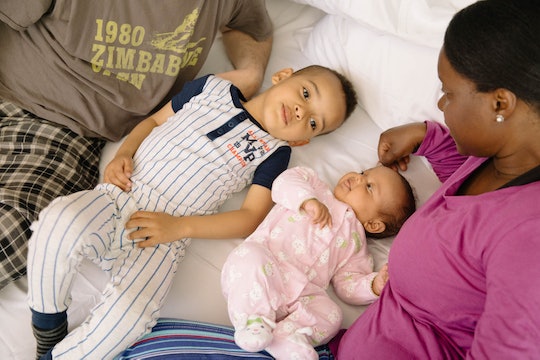 When I found out I was unexpectedly pregnant with our fourth child, I immediately worried about our third, who was still less than a year old. We'd never had children so close together, and I was concerned that it would be damaging for my sweet unsuspecting boy. My kids had seemed to adore having each other around, but I was beginning to question how giving your child siblings affects their brain.

Dr. Kyle Pruett, clinical professor of child psychiatry at Yale School of Medicine and The Goddard School Educational Advisory Board member, reassures me that the affects really depend on the parents' personalities, the structure of the family, and the ages of the children when a new sibling is born. Unfortunately, according to Pruett, there have been no studies done that have included brain scans of a child with a new sibling, so all that science has is observation-based.

But since 80 percent of the U.S. population has at least one sibling, making it by far the majority experience, it's a fair question to be asking. How does growing up with a younger sibling change the person you would have been had you remained an only child? And how do you go about making that decision with your own child in mind?

In a healthy family, having a sibling has been shown to positively affect a child's social skills and cooperative behavior. But pulling the proverbial trigger can be hard for parents to do, as concerned as they are about spreading enough love and attention between two or more children. It might provide some comfort to know that in Pruett's experience, "Both moms and dads typically assume things are going to fare worse than they actually experience them to be as they look back later."

One important factor in how well a child adjusts to a new sibling is their relationship with their dad. Pruett says, "Make sure that the father remains close to the firstborn. They both are experiencing something similar, they are both losing a little bit of the main woman in their life as she is involved with the baby. Children with warm, connected relationships with their dads manage the stress of having a sibling much better than those who are disconnected from their fathers."

On this note, studies indicate decreases in a mother's affection and verbal response to her firstborn when a sibling is born — especially in the first six months. But don't let this data scare you; it's a perfectly normal phenomenon that human children have experienced since the beginning of time. It's just a strong argument for dad to step up to the plate with the firstborn while mom's energy and attention are needed elsewhere for the time being.

Pruett points out that a parent's eagerness to add another child to the family might have to do with their own birth order. "If you are a mother and grew up as a secondborn, you are more likely to be enthusiastic about it then if the mother is a firstborn."

Children's needs, temperaments, and family systems differ tremendously, so there is no consistent way to predict how the birth of a sibling will affect him or her. "Some children experience sibling birth as a way to grow and realize they are not the baby anymore. Some experience it as a loss of good and services. Neither reaction is bad, they are both normal and should ultimately lead to the child's growth," Pruett tells Romper.

As I watch my youngest boys play, only 19 months apart, I have the unmistakeable feeling that they were somehow meant to be together. Watching them form a friendship of their own has been one of the sweetest gifts of my year — and I like to think I've given each of them a pretty great gift, too.