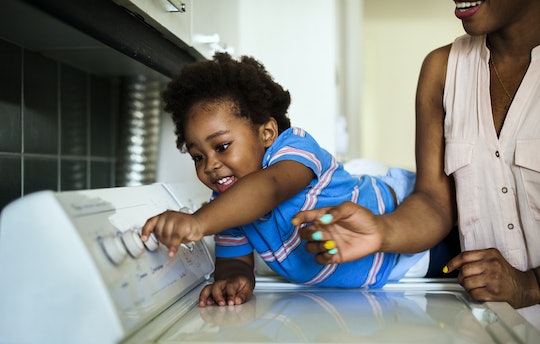 Growing up, my parents were pretty lax on chores, and I wasn't expected to do much by the way of housework. My MawMaw took care of my siblings and me, and she was very particular about the way things should be done so she mostly did it herself. My children, however, have loads of chores, because I realized with some chagrin that I didn't know how to do most housework until I was a grown woman. I didn't want that for my kids. I have no idea how giving your kids chores affects them later in life, but I do know I want them to be prepared. As it turns out, I'm preparing them for more than just the dishes and the laundry.

According to research done by the University of Mississippi, having your kids do chores beginning at age 3 or 4 dramatically changes their behavior and steers their development. Their research shows that children who are given chores from a young age are better prepared academically, physically, and even professionally later on in life, as reported by The Wall Street Journal. The study shows that the routine, responsibility, and rigor of chores at home allows them to begin to understand the needs of others, as well as what it means to have something demanded of them regularly, which leads to better study habits, professional work ethic, and attaining personal goals.

Psychologist Eileen Kennedy-Moore Ph.D. wrote for Psychology Today that chores are about more than just getting your walls cleaned or the toilet scrubbed — it's about instilling in your child a sense of duty to themselves and to others. "Insisting on chores sends children the message that being part of a family means pitching in and doing things for the greater good," she wrote. While we may be tempted to do it ourselves so that it gets done properly, as was the case with my MawMaw, that's not the right attitude when it comes to chores with kids because the value is in more than just getting it done.

Kennedy-Moore wrote that in spite of how they may react to the idea of doing chores, studies show that children who do chores are actually happier than those who don't. I will add that my children are always very proud of the work they've done, and at this point they go above and beyond when it comes to chores like "setting the table." My kids now "add ambiance," to the table settings by adding our battery-operated flameless candles and a houseplant to make the centerpieces. Granted, they still moan when it comes to cleaning their own spaces, but I'll take what I can get at this point.

What I found fascinating is that, according to the University of Michigan, "Structure and routine can also help parents build their child’s self-control and, in turn, reduce power struggles with parents." That means that the more chores are enforced and expected, the less friction there is to complete the task. This is conferred to children into adulthood by reifying the idea that when it comes to work or school or life, that sometimes it pays to do the work. This means that adults who had chores as a kid are less likely to procrastinate, they're more goal-oriented, and they have better plans of action to get things done.

And it's not just the workplace or school where you'll see how giving your kids chores affects them later on in life — it's also in their interpersonal relationships and time management. Julie Lythcott-Haims, former dean of freshmen and undergraduate advising at Stanford University, told The Boston Globe, “When they’re at a job, there might be times that they have to work late, but they’ll still have to go grocery shopping and do the dishes.” Needless to say, the chores you assign likely won't be done perfectly, and honestly, you'll have to re-do some of them, but they're a crucial part of childhood development. It can be an irritating task to supervise the chores instead of just doing it yourself, but it's a necessary step in growing and maturing into a functional adult, so it's definitely worth it.