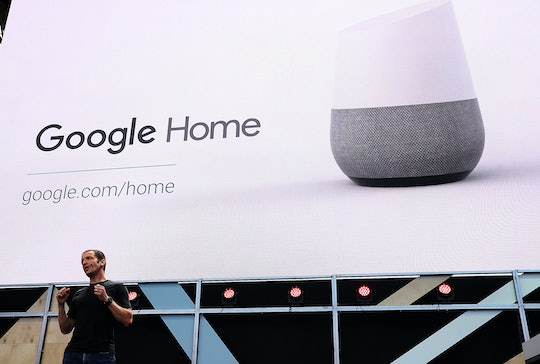 Google Home Is Preventing Kids From Ordering Under Your Name

Voice-activated home assistants can sometimes make things a little too easy. New developments in Google's smart home hub are now working against this, in order to keep your wallet a little safer. Here's how Google Home prevents kids from ordering things — because, seeing as a 6-year-old ordered an $160 dollhouse on Amazon Echo recently, this is something we apparently need to account for in the smart house age.

More Like This
The Avengers Campus Is Open At Disneyland: Everything You Need To Know
Sesame Street Characters Can Now Help Your Kid Unwind Before Bed
Where To Travel With Your Kids This Summer
Ayesha Curry’s Chicken Bites Are Irresistible To Even The Pickiest Eaters

Starting Thursday, Google Home devices are able to distinguish between voices, basically ensuring that someone else can't order things on your account; Further personalization now allows the device to deal with multiple accounts at once. In a statement to The Washington Post, Google assured that these new preferences would prevent someone else from ordering toys on your Google Assistant account because, naturally, "Only you would be able to shop via Google Home." When properly set up, the new and re-vamped Google Home "only gives out personal details to the targeted user but still works for simple searches and requests for other users," which is a huge relief for parents with precocious, home hub-friendly kids.

But how, exactly, will Google Home know your voice from that of your 6-year-old's? Google's blog shared a little insight on how to get with the update:

When you connect your account on a Google Home, we ask you to say the phrases "Ok Google" and "Hey Google" two times each. Those phrases are then analyzed by a neural network, which can detect certain characteristics of a person's voice. From that point on, any time you say "Ok Google" or "Hey Google" to your Google Home, the neural network will compare the sound of your voice to its previous analysis so it can understand if it's you speaking or not.

Still, leaving your kids alone with Google Home might not be your safest bet. "We don’t recommend that users rely upon voice identification as a security feature," the aforementioned statement offered as a disclaimer. Regardless, this puts Google Home slightly ahead of Amazon's Alexa, at least as far as security roll-outs are concerned. Rumors that Alexa was going to implement voice recognition have been swirling for some time, but it appears that Google beat them to it this time around.

As kids often get the hang of technology a little faster than their parents do, parents should still still be sure to monitor all devices. Another sneaky 6-year-old used her mother's fingerprint to buy Pokémon toys totaling $250, all on her mom's Amazon phone app, so really anything is possible. Whereas voice recognition is a definite help, even Google admits that it's not the be-all-end-all where security is concerned.