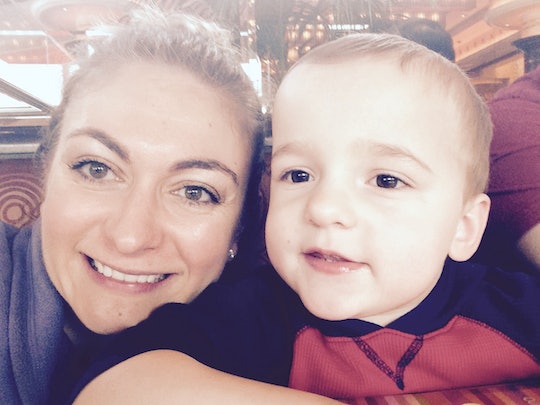 How Having Kids Trigged My Binge Eating Disorder

I knew that having twins would be an emotional roller coaster. I anticipated that I was in for some sleepless nights, that there would be moments of all-consuming terror when I realized I was responsible for the well-being of two very tiny people. I knew my body would change and that my day-to-day life would never be the same. I expected life as a parent wouldn't always be easy, but I was absolutely shocked when the stress of parenting multiples triggered my binge eating disorder.

My relationship with food has always been complex. I grew up viewing unhealthy food as a reward, something I earned for getting through a stressful day or accomplishing a hard task. Once I had my driver's license, it was all too easy for me to stop off for fast food on the way home from a difficult day at school or pop over to the drugstore to buy a few bags of candy to cheer myself up over a fight with a friend.

Things got worse once I graduated high school and moved on to law school. I was separated from my family for the first time, living with a boyfriend who I wasn't happy with, and struggling to keep up with a challenging course load. The nights were I knew I'd have the apartment to myself was when I'd allow myself to binge as a way of coping with everything I had going on. A average binge for me would be a entire bag of potato chips, half box of cereal, a pint of ice cream, and a bag of popcorn or box of cookies — all in about an hour.

Binging is simultaneously reward and punishment.

According to the Mayo Clinic, binge eating is defined as a "serious eating disorder in which you frequently consume unusually large amounts of food and feel unable to stop eating." The National Eating Disorders Collaboration (NEDC) views binge eating as a serious mental illness characterized by regular episodes of binge eating. Binge eaters don't use compensatory behaviors like self-induced vomiting or over-exercising.

When I binge, it's almost as though I'm not entirely aware of the fact that I'm eating; I'm just focused on answering the urge to put things into my mouth and swallow as fast as I can. It's not until I realize I'm on the verge of throwing up that I look down and see how much I've eaten. In fact, some of my favorite foods at the time to binge on were small candies like Skittles and M&Ms because I could swallow them whole without having to take the time to chew.

I thought my days of binge eating were behind me. Then, I had twins.

Because I've always been very active and I truly love to exercise, hiding my binge eating tendencies in law school was pretty easy. The couple of days after a binge, I was careful about eating healthy foods, working up a good sweat, and drinking lots of water. My weight never really fluctuated all that drastically and no one, not even my roommates, ever really knew how out of control my stress-eating had become.

Still, I didn't like the loss of control I felt during a binge and I hated how bloated and upset my body was afterwards. Binging is simultaneously reward and punishment. On one hand, I was rewarding myself for dealing with a stressful situation by eating something that tastes good. On the other hand, I was punishing myself for not being able to better handle the stress by eating food so quickly and in such large quantities that it made me feel ill. Binge eating is vicious cycle of self-loathing and self-medicating, one that's really hard to break free from.

Being a stay-at-home mom was a big change for me. I was lonely and still recovering from a difficult pregnancy and c-section, so my usual methods of stress relief, like yoga and running, weren't an option. Once again I turned to binging to deal with the stress of life at home.

By the end of law school, I was doing well. I started focusing on other ways to deal with my stress like yoga, running, and meditation. I went several years without a binding episode and even felt good enough to keep foods like chips and cookies in the house without fear that I would devour them all in a single sitting on a bad day. I thought my days of binge eating were behind me. Then, I had twins.

As happy as I was to become a mom, adjusting to the reality of caring for two babies took an incredible toll on me. Even though I love my boys very much, being a stay-at-home mom was a big change for me. I was lonely and still recovering from a difficult pregnancy and c-section, so my usual methods of stress relief, like yoga and running, weren't an option. Once again I turned to binging to deal with the stress of life at home.

When the kids were crying all morning long and I'd run out of ideas for ways to try and soothe them, I'd slip into the kitchen for a piece of chocolate and find myself cramming the entire bag of Hershey's kisses in my mouth in an effort to make myself feel better. Even when I tried to set myself up for success by not having snack foods in the house, I'd still find a way to binge when the urge struck. If the boys fought me to go down for a nap and fell asleep in my bed rather than their cribs, I'd vent my frustrations over feeling trapped in the room with them by running downstairs and grabbing whatever we had in the cabinets — bags of Goldfish crackers, boxes of baby biscuits — gobbling all the candy and then telling my partner we must have left the bag at the store rather than confess that I'd eating it all.

When the kid were about 18 months old, I realized something had to change. In the past I'd tried to down play my binge eating by telling myself that it's not "that big" of a deal. I'm not addicted to drugs or an alcoholic, I'm not abusing my kids. I've used the idea that the only person I'm hurting through my binge eating is myself as a way to justify my actions. But I know that's not really true. Binge eating can have serious long-term effects on my health, and according to the National Eating Disorder Association, some consequences of binge eating include heart disease, Type II Diabetes, high blood pressure, high cholesterol, gall bladder disease, and other health risks associated with clinical obesity. By not taking care of myself, I'm not just putting my own life at risk, I'm also doing a disservice to my kids by not doing everything within my power to live long enough to watch them grow up.

I've also admitted my binge eating disorder to my partner and now we talk openly about it me hiding it from everyone. Knowing I can call him for support if I'm having a rough day is sometimes all I need to stop myself from wanting to binge.

I now make an effort to schedule regular mental breaks for myself throughout the week. If I know I have a mid-week yoga class to look forward to, or if the kids are having a bad day but I have an afternoon run planned, taking a time out for myself helps me not feel as powerless in the moment. It often helps me hold a binge at bay.

I've also admitted my binge eating disorder to my partner and now we talk openly about it me hiding it from everyone. Knowing I can call him for support if I'm having a rough day is sometimes all I need to stop myself from wanting to binge. And if that doesn't work, I'll sometimes try cramming a wad of gum in my mouth so my body gets the sensation of chewing repetitively like a binge without actually consuming anything, and that's enough to satisfy the urge.

I'd be lying if I said I never have slip ups. The shorter days of winter are always a hard time for me and there may or may not be a half-eaten bag of chocolate baking chips currently hidden in my underwear drawer for particularly stressful days. But my partner knows about that bag, and it's not accompanied by dozens of empty candy bar wrappers and chip bags like it has been in the past, so I'm counting that as progress.

To be clear, I don't blame my kids for my binge eating disorder. Binge eating was something I struggled with before I became a mom and even if I never had children, it's quite possible that other stressors in my life could have triggered me to start binging again. At one point just before my kids were born, I thought binge eating was a chapter in my life that was long gone, like wearing butterfly clips in my hair or listening to techno. But I realize now that it's a challenge I'll continue to face in times of stress. So I'm treating my binge eating disorder the same way I treat being parenting: doing the best I can, and taking it one day at a time.

More Like This
14 Recipes For Sick Kids When Everyone's Tired Of Canned Soup & Crackers
10 Moms On Why They Exercise
Is Raspberry Leaf Tea Safe To Drink During Pregnancy?
My Slowest Marathon Ever Is The One That Makes Me Most Proud
What Parents Are Talking About — Delivered Straight To Your Inbox