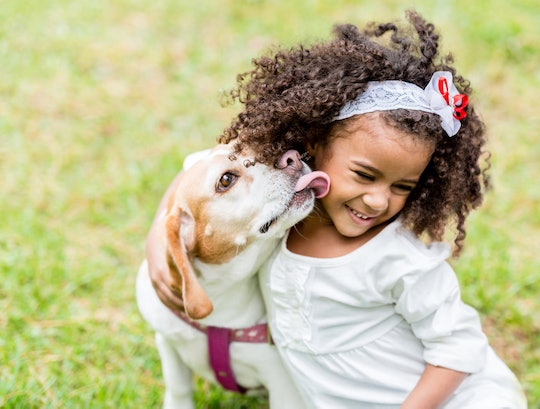 Kids lobbying their parents for a furry addition to the family often make their cases based on the self-improvement pet ownership is widely believed to bring: If you let me have a cat, I'll feed him every day, they say. I'll be responsible! If I get a dog, I'll walk her all the time, they argue. It's great exercise! And it goes both ways: Many moms and dad also tend to believe that adopting a pet will have positive effects for kids, a belief that's no doubt led to many a happy trip to the local shelter. But a new study revealed how having pets really affects your child's health — and it may puncture some pretty significant holes in the pro-pet argument.

Before conducting the statistical study of more than 5,000 families, the research team at the nonprofit research organization RAND Corporation "assumed from our own personal experiences that there was a connection," between pet ownership and children's mental and physical health, RAND statistician and study co-author Layla Parast said in a press release. Instead, they were "surprised" to find that this was not the case after all — and that other factors primarily associated with socioeconomic status explained the perceived link. In short, owning a cat or a dog is "more of a signifier of the sort of life that leads to better health, not the driver of that better health," as The Atlantic's James Hamblin summed up the findings.

In order to come to the conclusion they did, the research team analyzed information from the 2003 California Health Interview Survey, which offers insight into which families had a dog or a cat. It also include health and behavioral information about kids who were between the ages of 5 and 11 years old at the time.

And for people who love cats and dogs, the results were absolutely striking. Initially, it turned out the way that anyone paying attention to the numerous previous studies that tout the positive outcomes of having a pet would expect: The kids whose families had a cat or dog were more physically active and in better overall physical health than those without a furry companion, according to Medical News Today. They were more likely to have ADHD, but their parents had fewer concerns about their moods, feelings, behavior, and ability to learn.

But then the researchers adjusted the data to account for more than 100 factors such as income, language skills, and the type of housing in which the kids lived. And just like that, the statistical link disappeared.

As Hamblim pointed out in The Atlantic, the data used in the study — the largest of its kind — references one point in time. So, kids could have had unaccounted for exposure to a pet that influenced the outcome in a way the researchers weren't able to capture.

Also, the study does not at all suggest that having a pet is in any way bad for kids: "I think there are many other positive benefits to owning a pet besides thinking that it will improve your health," Parast told The Atlantic. "Obviously having a pet brings joy and companionship and a multitude of other things."

So, it may be a good idea for parents to dig a little deeper when it comes to considering the advantages widely believed to be associated with pet ownership. But when kids inevitably ask you for a puppy or kitten, saying yes could still be a great move.