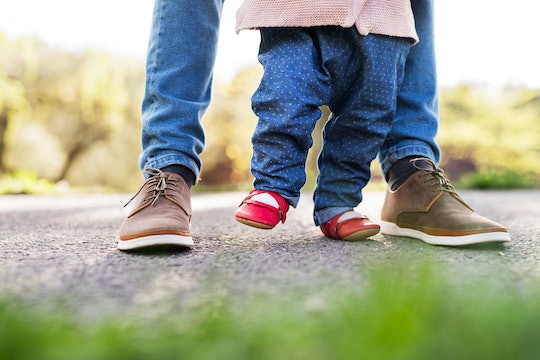 Here's How "Helicopter Parenting" Could Negatively Affect Your Child, According To New Research

There are so many different ways to approach this whole parenting business. Quite frankly, it can be dizzying for first-timers. Will you be an attachment parent? A crunchy parent? Authoritative, permissive silky, free-range, laid-back, helicopter, or tiger? While most parents are likely some combination of these approaches, chances are, many of us can identify more with one or two in particular. (And it's not necessarily a conscious choice, either.) One style that's given millennials, in particular, a pretty bad rap is the concept of "helicopter parenting," named for the way parents "hover" over their children and micro-manage many things in their lives. And unfortunately, I've got some bad news for those who consider themselves in this camp. According to a new study, "helicopter parenting" could negatively affect your child's well-being in a few ways later in life.

For the new study, published by the American Psychological Association, researchers followed 422 children over a span of eight years, assessing them at ages 2, 5, and 10, according to Science Daily. They looked at several components: Teacher-reported responses, self-reports from the children at age 10, and observations of parent-child interactions. During these observations, parents and children were asked to play as they would at home while researchers took notes.

"Helicopter parenting behavior we saw included parents constantly guiding their child by telling him or her what to play with, how to play with a toy, how to clean up after playtime and being too strict or demanding," Dr. Nicole B. Perry, lead author of the study, explained in a news release. "The kids reacted in a variety of ways. Some became defiant, others were apathetic and some showed frustration."

Researchers ultimately found that helicopter parenting when a child was 2 was associated with worse behavioral and emotional regulation at age 5, according to The Guardian. Likewise, the better a child's emotional regulation was at age 5, the lower the likelihood of having emotional problems/higher the likelihood of having better social skills and being more productive in school by age 10. And at age 10, kids who had better impulse control were less likely to have emotional/social problems and were more likely to do better at school.

Perry said in the same news release of the study's findings:

Our research showed that children with helicopter parents may be less able to deal with the challenging demands of growing up, especially with navigating the complex school environment. Children who cannot regulate their emotions and behavior effectively are more likely to act out in the classroom, to have a harder time making friends and to struggle in school.

The real question, then, is: What should helicopter parents be doing instead? Talking to children about their emotions — including what behaviors might come as a result of certain feelings and their consequences — can be a step in the right direction, Perry explained in the news release. Parents can then take it a step further by helping their kids figure out positive coping strategies for these feelings, such as breathing exercises, alone time in a quiet area, and music, Perry noted in the same news release.

Of course, this isn't the first study that has linked helicopter parenting with negative outcomes. A 2017 study showed a connection between this particular parenting style and anxiety in children, Psychology Today reported. And a 2012 study of 439 undergraduate students revealed that even with high levels of parental warmth, children of helicopter parents reported lower self-worth and higher levels of risky behaviors, according to Psychology Today. While lower levels of parental warmth resulted in worse scores in both of these areas, higher levels of warmth didn't cancel them out completely, either.

“Overall, stepping in and doing for a child what the child developmentally should be doing for him or herself, is negative,” Larry Nelson, a professor of family life at Brigham Young University, said in a statement, referencing the 2012 study. “Regardless of the form of control, it’s harmful at this time period.”

I'll be the first to admit that I have to remind myself to allow my children to figure things out for themselves. And in certain situations, I'm definitely a hoverer. But I try to resist this natural instinct the longer I'm at this parenting gig. Because as much as we want to protect their children from failure, though, studies like this one show the importance of not immediately coming to the rescue all of the time.