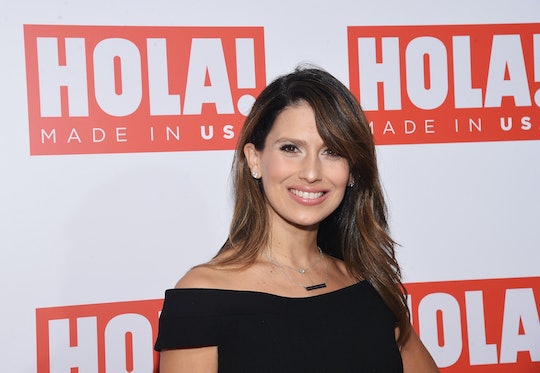 Hilaria Baldwin Has No Room For Hate In 2017

Though today's families have it easier than the early settlers (thank you, electricity), there are still several challenges that come with raising a kid in the 21st century. Every day, kids encounter messages of hate. Whether it's reading about a political figure who insults women, seeing strangers come to physical blows in the street, or hearing an adult mutter a racial slur, kids are learning to hate others simply because they're different. It's this display, especially as of late, that pushes Hilaria Baldwin to raise a positive and progressive family.

"We are so similar," the lifestyle guru tells Romper during a phone interview. "There shouldn’t be this big gap, whether we’re talking about economics, celebrities, or politics. We all wake up... We all think, 'What am I going to eat? What am I going to wear?' And it's those things that make us very similar."

Baldwin tries bridge this unnecessary gap on daily basis, whether it's in her a role as a mother of three or a yoga instructor to hundreds. In fact, her desire to bring people back to a happier, hate-free place inspired Baldwin to write her most recent book, The Living Clearly Method. Though many have dubbed Baldwin's debut book as a "health and fitness guide," it goes way beyond exercise and eating tips. The main goal of The Living Clearly Method is to create calm among all the chaos life throws your way.

In a world where everybody is thinking about 'the other' and how different we are, this brings us closer together.

"In this day and age, when everything feels very complicated, I feel like this book simplifies things," she says. "It’s trying to connect to you so that you shine brightly enough and live your life in the way you wanted to."

And though she shines now, things weren't always so bright. In her book, Baldwin opened up about a 20-year battle with bulimia and anorexia. She wrote:

"By the time I was 20 years old, my 5-foot-3 frame was at least 20 lbs. under a healthy weight. My nails were brittle, my hair was falling out, my period was MIA, and my energy had tanked. I was miserable and desperate to feel better.

"Without realizing it, I started drifting away from the playful connection to movement I’d enjoyed as a young child and into a different and darker kind of dynamic: pushing my body to its limits and commanding it to perform through pain or fatigue."

Baldwin was eventually able to win this battle, but then another challenge came her way: motherhood. After giving birth to daughter Carmen in 2013, Baldwin noticed a shift in her lifestyle. And when she gave birth to son Rafael and Leonardo in 2015 and 2016, respectively, she felt the shift again. She quickly learned that sacrifices had to be made and stress had to be managed in order to keep things running as smoothly as possible.

"It’s all about trying to find time and balance," Baldwin says. "In trying to find balance, I’ve taught myself to become more present so that I don’t flip out." Of course, that's not to say Baldwin always keeps calm. She admits to losing her temper on occasion. When that happens, she hits pause on her life and takes some time to herself. Even something as simple as striking a yoga post (her go-to is Shavasan) can help when she "feels my blood start to boil."

Still, there are some things so disheartening that even a yoga pose can't negate the pain it causes. Things like homophobia, sexism, and racism — these are all moments when Baldwin uses her role as mom to try to instill change. As a native of Spain, Baldwin is teaching her kids Spanish and raising them as bilingual. In doing so, she hopes it helps them look past people's differences.

"In a world where everybody is thinking about 'the other' and how different we are, this brings us closer together," Baldwin says of teaching her kids multiple languages. "They realize they are 'the other' too, and they don’t have to be afraid of people who speak other languages, or practice different religions, or look differently, or live in different parts of the world. To make the world seem so close together makes us seem more educated and smart, and less fearful."

In addition to raising kids who are accepting of all races, religions, and lifestyles, Baldwin is working extra hard to raise a strong daughter in a world that tries to weaken women.

"Carmen is a force to be reckoned with," Baldwin says. "But it’s interesting to see that, at 3, she’s starting to take in more of the outside world." To combat the negativity her daughter and other young girls hears daily, Baldwin suggests parents treat children — no matter their gender — like adults.

"I try to give her a strong sense of self," Baldwin says. "I listen to her. I validate her. I respect her."

"I don’t want people to feel like I’m trying to shove my lifestyle down their throats," she says. "These are the ways I’ve found that work for me and the people I've taught. If they don’t like what they read in the book, it’s OK. Ultimately, I just wish everyone the best."

That being said, everyone could probably benefit from a few breathing exercises, right?

Hilaria Baldwin has partnered with eBay for Charity to celebrate the launch of her book. Until Jan. 7, shoppers can bid on the chance to participate in a private yoga class with Hilaria on Jan. 11, where they will receive 'The Living Clearly Method' and some of her favorite items. All of the proceeds go to Bent on Learning, a nonprofit that brings yoga to inner-city schools. You can bid here.