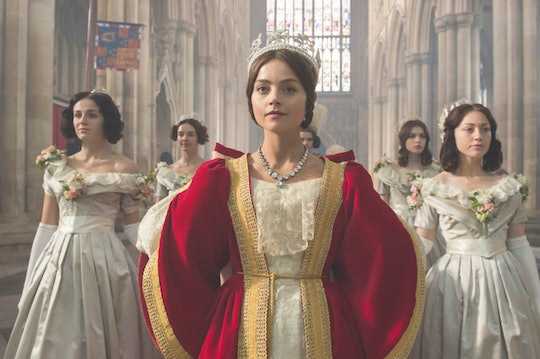 If the end of The Crown left you craving more content about young queens taking over the English throne, then PBS has the answer for you. After a successful run in the U.K., Victoria is about to come to the states on Masterpiece on PBS, making its U.S. premiere on Sunday, Jan. 15 at 9 p.m. ET. Victoria follows one of England's longest-reigning monarchs (until Elizabeth II snatched the title) in the earliest days of her rise to power. It tackles her adjustments to royal life and whirlwind romance with Prince Albert, a love that would last the rest of their lives. It's bound to be an exciting, romantic series, but how historically accurate is Victoria on Masterpiece?

Like many historical dramas, some things on Victoria are true and some are not. Though many of the events on the show are taken from the queen's real life, they don't play out quite the same way they did in reality. That has caused the show to receive some criticism, particularly because there are so many resources available. Queen Victoria kept detailed diaries throughout her life, which gives any production based on her a lot of material to work with when it comes to depicting key moments in her lifetime and understanding her personal feelings about them. Despite this surfeit of information, the show still sought to embellish for dramatic effect, as many historical dramas do.

Some viewers were bothered by the fact that Jenna Louise Coleman and Rufus Sewell didn't look enough like their historical counterparts, Queen Victoria and Prime Minister Lord Melbourne, respectively. Both actors were somewhat more attractive than the real-life figures they embodied, as well as not quite the right age; Coleman is older than Victoria and Sewell is younger than Melbourne. But superficial matters aside, the show concocted a romance between the two that simply wasn't present in real-life. Victoria and Melbourne had such a large age difference that he was more of a father figure to her than anything else.

The show also exaggerated the machinations within the palace. Several characters (including Victoria's own mother) attempted to oust Victoria from the throne over the course of the first season. The creative scheming of Victoria's mother, her uncle, and comptroller Sir John Conroy wasn't historical fact, but rather pulled from real tensions and hyperbolized for added drama. Victoria did have a tense relationship with her mother and rumors swirled that her uncle was plotting against her, but there was no confirmed attempts at sabotage in real life. The real Victoria did remove Sir John Conroy from her household, however.

Victoria's romance with Albert, an important part of her life and the show, is adjusted for maximum dramatic tension as well. In Victoria, the queen does not take to Albert at first, initially disliking him before slowly realizing her feelings for him. In real life, it was basically love at first sight.

What Victoria did is common to many fictionalized takes on historical figures: it adjusted the truth based on the story that it was trying to tell. It might still have told the story effectively and captured the heart of the person or the era, but it wasn't one hundred percent factual. However, the added drama may help for you to enjoy the series even more. You'll find out soon enough.