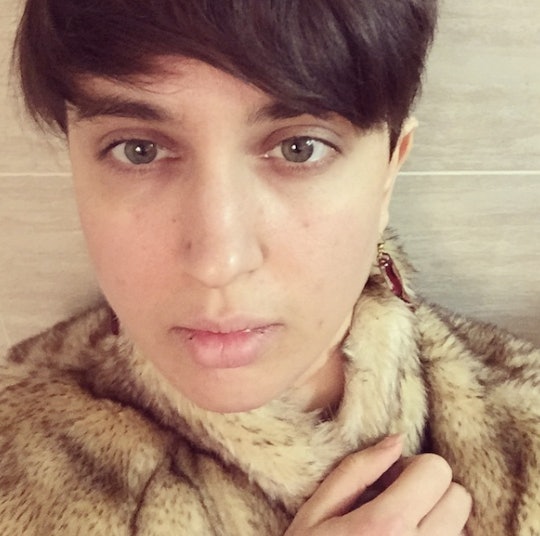 How I Became Sex Positive — Again — After My Sexual Assault

Actually, I lied again. I didn't just "become" sex positive after I was raped, because rape didn't make me sex negative. It just made thinking about sex and being intimate with someone else after it happened suddenly feel like I was thinking in a foreign language. After I was raped, I started therapy and tried to sort through the cocktail of new emotions I felt. In fact, I'm still with said therapist today, eight years later. In the beginning, I mostly was trying to figure out how to just be a person in the world with this experience inside me. It took a while for trying sex again to even be on the table.

I was waiting for someone I liked enough, trusted enough, before I tried that part.

The first person to ever put their penis in my vagina was Teddy, a musician and substitute teacher. Teddy was one of the sweetest souls I've ever met. So sweet, in fact, that he would let me walk all over him, and I knew I was doing it and I hated myself for it, and so I dumped him. (He bought me a beer after I dumped him, seemingly unfazed by the whole thing, and I gave him a blow job in his driveway. If only all breakups could be so easy.) We became f*ck buddies, sometimes. We lived in different states. We still liked each other a whole lot.

I'd spent a fair amount of time in different people's beds in college, sometimes naked, but a penis entering my vagina hadn't been part of the equation. I was waiting for someone I liked enough, trusted enough, before I tried that part. And I'd found that in Teddy, even if we didn't make sense as a couple.

When I told Teddy about the rape, he reacted pretty much the way all my friends did: a healthy combination of "I'm so sorry," and "f*ck that guy." He even made me laugh about it; we joked that there should be a t-shirt that said "NOT RAPE > RAPE," and then a mutual friend actually made me the shirt. It helped. Sometimes I need to laugh at rape to take its power away.

The rape had frozen something inside my chest, and now I was thawing.

So it made sense that when my brain could finally process the idea of having sex again, it would be with Teddy. I could only just barely conceive of sex as something I might be interested in trying again; I couldn't really get my head around the idea of trusting someone new. And wonder of wonders, it felt nice. It felt like home.

That doesn't mean sex suddenly became simple. I had abrupt mood shifts and changes in desire, and a truckload of therapy and healing ahead of me. My therapist asked me questions that helped me become more self-aware and get a handle on my grief, but she was not a magician. Once, Teddy came into town for a holiday party (and, it was agreed, sex afterwards), only for me not to be in the mood when we got back to my place. And I still couldn't fathom sleeping with anyone new. But the rape had frozen something inside my chest, and now I was thawing.

See, the thing about sexual assault is that it shoots a cannonball through the pathway in your brain that believes, "If I ask for something to stop, it will." Returning to sex helped me re-build that pathway over and over again until it stayed put, but I could only conceive of doing that with people who'd demonstrated that to be true already.

Enter Mika, a one-night stand from college I'd always really, really liked. (It's hard not to carry a torch for someone after you make out in the snow and bond over your mutual love of Toy Story.) When I was visiting a relative in Mika's town, I asked Mika if he'd want to meet up, and ended up crashing at his place.

We acted all night like this was just a platonic meet up amongst friends, never even suggesting that we might want to hook up again. We got Thai food, played Scrabble, and shared an armchair before finally deciding to call it a night. Mika offered to sleep in the armchair, but I told him he didn't have to. We said good night and lay side by side in his bed, not touching, for about 20 minutes.

After my sexual assault, I thought maybe I would just stay outside my body forever. I couldn't even imagine ever having sex again. I was wrong.

And then, as if by telepathy, we grabbed and kissed each other at the same time.

That night with Mika remained in my college-era model of hookups — no "sex" in the traditional, heteronormative sense — but I still credit it with continuing the ongoing thaw of my insides. It was tender and easy and not at all scary. He was just familiar enough that I could feel comfortable, and just enough of a stranger that my mind could adjust to the idea of a new person. I never told him about the rape, or what a relief it was to feel comfortable with him. I'm not sure I was connecting all the dots at the time myself.

When I got back to New York, I started dating a lot, and having sex — a lot. I can't overstate how important this was to feeling like I was in control of my body again. Like I was back inside my own skin. After my sexual assault, I thought maybe I would just stay outside my body forever. I couldn't even imagine ever having sex again. I was wrong. Not only did I have sex again — good sex, bad sex, weird sex, rough sex, tender sex, sex with men, sex with women, sex with trans people, sex with friends, sex with strangers, sex with the love of my life — it turned out to be integral to my healing process. It returned me to my body. And it turns out, I even kinda like it in here.