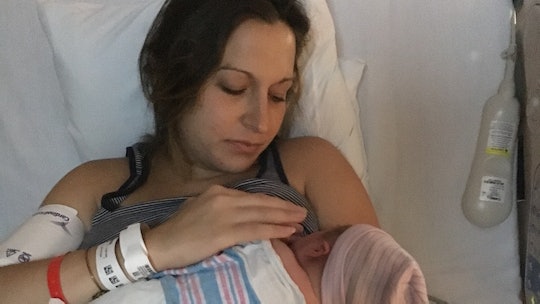 How I Got Over My Natural Birth Jealousy

From the moment I found out I was pregnant, I started to daydream about my ideal birth plan. As a yoga teacher I was surrounded by women who had home births or at the very least had given birth “naturally.” I hired a doula, went to acupuncture every week to prepare my body and spirit to bring my child into the world naturally and without intervention, and my husband took diligent notes in our natural childbirth class. I watched The Business of Being Born about four times during my first trimester, almost like I was doing some kind of self-imposed brainwashing. “Long Haired Child” by Devendra Banhart was on every one of my yoga playlists and I would be guiding my students through Sun Salutations while images of my future flower child’s magical birth would run wild through my head. There was no doubt in my mind that my birth would go exactly as I had planned: I would labor at home with my husband and doula until my son was a few contractions shy of falling out of my vagina and we would get to the hospital just in time for him to be born. Little did I know that nothing would go according to my plan: I would be induced, wind up with an epidural, and have to get over my natural birth jealousy once I realized I had the birth I was meant to have.

Eight months into my pregnancy, I was diagnosed with preeclampsia and had to be closely monitored for my health and the health of my son, for the remainder of his gestation. What started out as a magical and very organic experience started to become complicated and increasingly scientific. Despite the complications, I still planned on giving birth naturally because I was able to keep my blood pressure low and the doctors were confident that everything would be fine. I knew that I would need to be induced if either of us were not doing well but I did everything in my power to be sure I went into labor on my own and that we would both be healthy enough to stick to my plan for a natural and unmedicated birth.

I took evening primrose oil pills, went to acupuncture — you name it, I tried it, and my son still insisted on staying put.

My due date approached quickly and, worried about being induced if I ran long, I researched and tried every way to start to kickstart labor that the internet had to offer. I ate dozens of dates, drank raspberry tea, and went for long walks up and down the staircase in my apartment building. I took evening primrose oil pills, went to acupuncture — you name it, I tried it, and my son still insisted on staying put.

Finally, two days after my due date I went for a checkup and my blood pressure was high, my fluids were low and my doctor uttered the phrase I had been dreading: “you need to go to the hospital now and have your baby.” I asked if I could go home and grab my hospital bag and she replied “someone will bring it to you later, I really think you need to go right now.”

I got to the hospital and they started the induction off with Cervidil, a cervical ripener, to hopefully kickstart the contractions and start labor without needing pitocin. It worked, my water broke and contractions began, but apparently I wasn’t progressing as quickly as my midwife thought I should be. Enter the pitocin.

I had been conditioned to dread pitocin throughout my entire pregnancy by all the documentaries and natural birth propaganda I had filled my brain with. I agreed to the pitocin and the contractions started to come much faster and much more intensely. I remember standing in my hospital room trying to focus on the conversation between my mother-in-law and my husband, and trying to keep from passing out each time a contraction hit. After a period of clenching my jaw and feeling like I was being torn in half, it dawned on me that I was not going to be able to endure the next few hours with this amount of pain and still have the energy to actually give birth to my son. I realized that since most of my plan had already been trashed the minute I needed to be induced, it wasn’t about somehow proving that I was strong and capable by giving birth naturally; kind of the opposite. Admitting that I couldn’t do it alone and that I needed an epidural if I was going to get through this was really an act of strength.

I allowed myself to get so wrapped up in my pursuit of this idea of what it meant to give birth naturally that I forgot that it really isn’t about how your child comes into this world and more so about the fact that they get here safely. Once I held my son in my arms and counted his little fingers and toes to make sure they were all there, any notion of somehow “failing” at my birth plan or being jealous of other women’s natural births just seemed so insignificant — none of it mattered to me anymore.

I somehow thought that I would be able to handle the intensity and that my training as a yoga teacher and years of guiding meditation would somehow allow me to turn my energy inward and rock the hell out of childbirth.

I love looking back on the kind of pregnancy I thought I would have and the kind of mom I thought I would be, before I actually became a mother. I have always had very strong opinions and clung very strongly to my convictions, and my ideas about birth and motherhood proved to be no different. I am a perfectionist. If I am not going to be the best at something I don’t even want to do it, and I somehow folded that attitude into my birth plan. I was convinced that birth was going to be a breeze for me. I wasn’t a total moron, I knew that it was painful and intense, but I somehow thought that I would be able to handle the intensity and that my training as a yoga teacher and years of guiding meditation would somehow allow me to turn my energy inward and rock the hell out of childbirth. It is also funny to me now that we expect women to even have a birth plan, and that we ask her to recite it continually throughout her pregnancy. Yes, it is good to know what you want and what you don’t want so you can advocate for yourself but using the word “plan” deceives us into thinking that we have any real control over a process that is mostly uncontrollable — one of the reasons some advocates prefer the term birth “options.” I had repeated my ~plan~ to have an unmedicated, natural birth over and over to anyone who would listen and it became so intertwined with my identity as a woman that when things didn’t go the way I envisioned, I found myself mourning the loss off that identity.

But that person who thought she’d rock the hell out of childbirth just wanted the best start for her kid. She didn’t fail. I might not have planned on learning my first big lesson as a parent in the delivery room, but there you go.