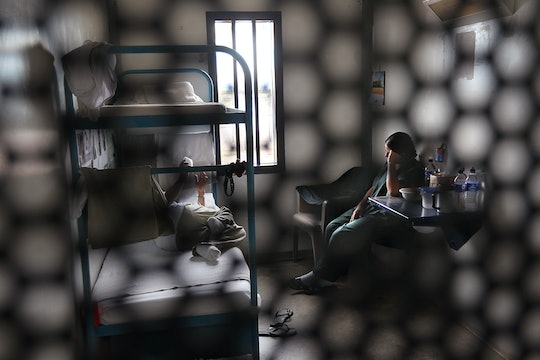 Under the Trump administration, there have been quite a few tweaks to the Immigration and Customs Enforcement's policies about detaining and deporting immigrants. This week, a new ICE policy about detaining pregnant women was made public, as HuffPost reported on Thursday, and some human rights groups feel that it will hurt women, though the agency maintains that it will continue to provide adequate care, according to statements emailed to Romper. The new policy has been in effect since December 2017, but was just publicly shared by the agency on Thursday.

According to the FAQs released with the new directive to Romper, ICE explains that the old policy was that women who were pregnant were "generally not detained unless their detention was mandatory under the law, or when 'extraordinary circumstances' warranted detention." Under the new policy, according to the same FAQs, ICE "will complete a case-by-case custody determination taking any special factors into account," which essentially means that the agency will consider holding pregnant women, even if they're not a flight risk or there is no "extraordinary circumstance."

ICE added in its statement to Romper that it will ensure "access to comprehensive counseling and assistance, postpartum follow up, and in certain cases, abortion services." It further explained that it might not hold some women after the third trimester, depending on the circumstances. It explained in the same emailed statement:

To better align with the President’s Executive Order, ICE has ended the presumption of release for all pregnant detainees. Instead, as with all detainees except those in cases of mandatory detention, ICE will complete a case-by-case custody determination taking any special factors into account.

ICE added in its statement that being detained while pregnant doesn't violate a woman's human rights, explaining:

This does not mean that all pregnant aliens will be detained; only those whose detention is necessary to effectuate removal, as well as those deemed a flight risk or danger to the community. Generally, absent extraordinary circumstances, ICE will not detain a pregnant alien during the third trimester of pregnancy. ICE detention facilities will continue to provide onsite prenatal care and education, as well as remote access to specialists for pregnant women who remain in custody.

It doesn't sound like too much will change, but human rights organizations are worried about the care pregnant women will receive. Last fall, the American Immigration Council, the Women’s Refugee Commission, the American Civil Liberties Union, among others, filed a complaint against ICE due to its care of pregnant women in custody.

The groups allege in their complaint that:

Several women report being ignored by detention staff when requesting medical attention or experiencing serious delays even during health emergencies involving severe bleeding and pain. In cases in which the woman was identified as having a high-risk pregnancy, she was not referred to a specialist. In several of the cases, there is concern that women are receiving inadequate and sub-standard medical care during and after miscarriage.

The complaint added, "In every instance, the women express concern that the conditions of their detention and pressure of preparing for their legal cases in detention has had a harmful impact on their pregnancies." Many of the women detained are survivors of sexual assault, the human rights organizations maintain, and being detained while pregnant only adds to their trauma, as reported by Vice's Broadly last year.

A report done by the Women's Refugee Commission on women being detained while seeking asylum found that "pregnant women in ICE detention are routinely denied adequate services and accommodations, including extra blankets, prenatal care, and time to rest during work detail." ICE denies any maltreatment of any of its detainees.

Although pregnant women were previously detained for some time, there was a policy in place that the agency would release them to other facilities that could suit their needs. This new policy will likely lead to more pregnant women in detention, which is in line with the president's promise to crackdown on immigration. Hopefully, moms and their babies can stay safe and healthy while under ICE's supervision.