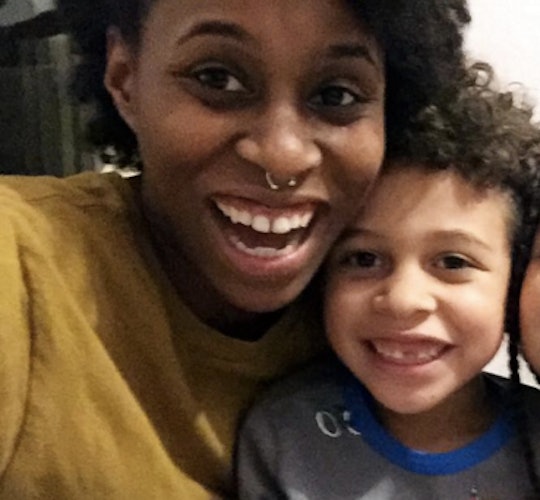 As a mom, I feel as if teaching our sons to be feminist and respectful of women is such an obvious choice. However, all too often we put the burden of feminism and respect only on our daughters. We allow boys the space to be dominant, and we don't ask them to take responsibility. We chalk up their physical abuses of others to "hormones," and “part of being a man,” as if that makes it OK. As a mother to both a son and a daughter, I am so sorry that we live in a world where we have to warn our daughters that they must always be vigilante while we let our sons run amok. I'm so sorry that so infrequently do we teach our sons to be sex positive. I'm so sorry we let "he didn't know any better" become an excuse.

I am a rape survivor, so talking about sex positivity is something that's especially important to me as the mom of a little boy. I am a female-presenting person who's had abusive encounters with sex, and I want to raise my son to be better. Before my son was born, the only thing I ever really thought about was the fact that I was raised to believe that sex is very much for a man. But when Beck arrived, I thought long and hard about what I wanted him to know about sex. I didn't want him to grow up with this idea that sex was just for him, that it was something he had a right to. Because that's not how girls grow up — not how I grew up.

I didn't want to nurture those beliefs in him. I was aware that there would be less available to him surrounding the idea of sex positivity (he's a boy, isn't sex always supposed to be great?), and I knew teaching him would fall solely on us, his parents. I wanted to avoid the whole "boys think like this; girls think like this" argument, as if that was all there was to it. I wanted to encourage a whole belief behind sex as a good thing, but also teach him that there are ways to diminish that goodness, ways to make it harmful, not only for someone else, but also for himself.

My daughter, who's a year older, will carry with her the stress and worry about being in places with men, and my son will rarely worry about where he is or what's in his drink or what time of day it is or if the street will be well-lit on his walk home or if the taxi driver will take advantage of him after too many drinks. I want Beck to know those dangers exist, and I want him to understand how the world will treat him differently because he was made with different parts. Teaching him won't doesn’t take away his ability to be sexual; it'll only help him understand how to exercise sex in a positive way. That supports not only him, but the partners he'll one day choose.

I was relying heavily on the fact that I was raising my son to respect women, thinking that would be enough. It's not.

For a long time when I talked to my children about sex I put more emphasis on how my daughter should approach it. But with my son, I never really bothered to emphasize much beyond "no means no." But I realized I was wrong. He's going to have his own encounters with sex, and I want him to be able to approach each one in a healthy way. I want him to know how to feel comfortable voicing what he needs, what he wants, what he's comfortable with, and what he isn't comfortable with. And I want him to know how to listen. This knowledge isn't something that only applies to my daughter, or to other girls.

I don't believe for one second that it's too soon to teach him what consent means, and that people also have to get consent from him.

I was relying heavily on the fact that I was raising my son to respect women, thinking that would be enough. It's not. There's so much more to being intimate with another person than just respecting them. So now, we have this conversation together: my son, my daughter, and me. I've shifted the focus to be less about what he shouldn't ever do, and we've instead focused on what ways you could respect yourself and another person. I want my son to know that the way he loves, respects, and adores his sister and me is the very way he should treat every woman in his life.

He's still very young, so when we talk about sex, it's on such an elementary level that he grasps it as a thing you do when you care about a person, when you're old enough to make that choice. But I don't believe for one second that it's too soon to teach him what consent means, and that people also have to get consent from him. When I was younger, I remember hitting a boy because I liked him, which made me feel so conflicted because hitting someone doesn't equate liking them. It was confusing. I talk about this with my kids, and they look as confused as I felt all those years ago. I always breathe a sigh of relief when they ask me why I touched someone without asking them first, because it shows they grasp personal boundaries, and that respect and consent already exist in who they are.

Recently my son told me about a little girl in his class who was his girlfriend because she's kind to him, always helps him, and likes him. I pointed out that she probably respected him, and that's the best thing a person who likes you can do. He responded, saying, "I respect her too. Maybe I'll ask her if I can kiss her someday." It felt like a personal parenting win. At 6 years old my son can articulate what's so often so hard for adults. He knows that level of intimacy isn't owed to him and it isn't something he's earned or has a right to. He views his classmate as a person who deserves his respect.

Even so, I worry about what will happen as he gets older. I can't predict the future, but I try to remember that we're laying a strong, good foundation now for Beck to view himself and the people around him. I have to believe that these conversations we have, and the practices we try to apply, will always stay with him. That he'll carry them into middle school, and high school, and then into whatever beds, or cars, or wherever teenagers might have sex these days. And I want to him to know that if he ever has questions or doubts, he can turn to me, and we'll figure it out together.