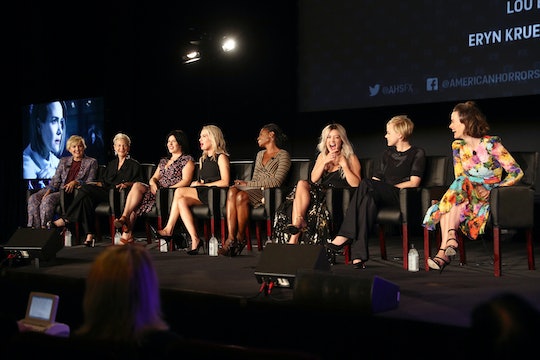 It's starting to look like the upcoming seventh season of American Horror Story will be playing on real world fears even more heavily than the show has in the past. The series has jumped around in time from decade to decade with references here or there to actual events, but Season 7 will be grounded very firmly in the immediate present. Long before fans knew what the theme of the season would be, series creator Ryan Murphy announced that it would be all about the contentious election that had occurred so very recently. But how is American Horror Story: Cult about the 2016 election? It won't be about the election itself, but the aftermath.

Donald Trump and Hillary Clinton are not characters in Season 7, though the influence of the election is still integral to the plot — and rubber-masked proxies of them both can be spotted in the opening credits. (And to say that they're creepy would be an understatement.)

American Horror Story: Cult isn't about the election so much as what can be stirred up in fraught situations like that — and how some people can take advantage of the fears of others. "It's not about Trump, it's not about Clinton," Murphy said in a Q&A with FX CEO John Landgraf, as reported by Variety. "It's about somebody with the wherewithal to put their finger up to the wind and see that that's what's happening and using that to rise up and form power. And use people's vulnerabilities about how they're feeling afraid... and they feel like the world is on fire."

The season will begin on election night, however. That's the jumping off point that allows the story to develop to its presumably terrifying conclusions. Season 7 follows a woman named Ally, played by Sarah Paulson, who is consumed with anxiety and paranoia after Trump's election. That isn't helped by the arrival of Evan Peters' Kai and Billie Lourd's Winter, who both seem focused on unsettling Ally even more as they infiltrate the home she shares with her wife and son.

"The characters have very strong points of view about Trump and Clinton, but it really is not about them," Murphy continued. "It really is about the rise of a cult of personality that can rise in a divided society." That leads to more of the show's signature time jumping, in which Peters tackles several cult figures throughout history like Charles Manson, Jim Jones, David Koresh, and Andy Warhol.

It seems like AHS: Cult will be expanding its focus as the episodes goes on, much like previous seasons did, but the election remains the inciting incident that gets the story started. It's just not the whole story.