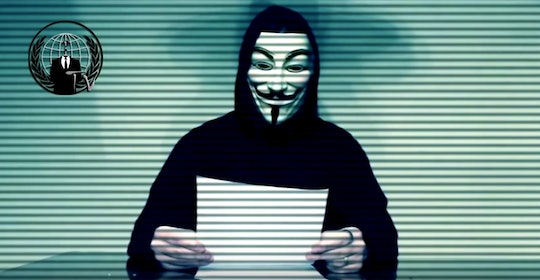 How Is Anonymous Going To Attack Donald Trump? The Group Declared "Total War"

Republican presidential candidate Donald Trump might be highly controversial, but given his runaway success with right-wing voters, it’s also clear that he has a solid and devoted following. While Trump’s campaign is being criticized daily for a seemingly-unlimited number of reasons (allegations of racism, misogyny, bullying, encouraging violence and hatred, etc.), it hasn’t seemed to do much to affect Trump’s popularity. But hacktivist group Anonymous, for one, seems to have had enough. According to Mic, Anonymous declared “total war” on Trump Wednesday, vowing to bring down his campaign. But how is Anonymous going to attack Donald Trump? According to a video message released by the group, the cyberattack — referred to as #OpTrump — will attempt to dismantle Trump’s online presence, as well as his personal image by “[exposing] what he doesn't want the public to know.” Anonymous has encouraged everyone, regardless of hacking experience, to join the effort, and has also set a timeline for the takedown: April 1.

The video clip released by the collective features an individual wearing Anonymous' signature Guy Fawkes mask, outlining the plan and calling out Trump for running an “inconsistent and hateful campaign,” which has “not only shocked the United States of America, [but] the entire planet.” Calling the message “a call to arms,” the group said viewers are encouraged to join its effort “to shut down his websites...dismantle his campaign and sabotage his brand.”

Twitter was buzzing with anticipation over the news Wednesday morning, with many excited at the prospect of Anonymous getting involved to take down Trump. But this isn’t actually the first time the group has targeted Trump during his campaign: according to The Guardian, Anonymous hit back against Trump’s plan to ban all Muslims from entering the U.S. following the mass shooting in San Bernardino, California, in December 2015. As retaliation for the anti-Muslim remarks, Anonymous hacked the website for Trump Tower in New York, bringing it offline using a distributed denial of service attack (DDoS), which “overwhelms a site’s servers using bogus traffic.”

Anonymous-affiliated hackers also allegedly accessed Donald Trump’s voicemail in early March. According to Gawker, who received the messages, the hacker’s goal was to make them public to show the candidate’s supposed “cozy relationships” with the liberal media he claims to stand against.

There’s no doubt that Anonymous is a powerful network of individuals capable of hacking into, well, almost anything, and causing pretty significant damage. But will this latest promise of action actually be able to put a big enough dent in Trump’s overwhelming popularity among Republican voters? After all, Trump has been on the receiving end of plenty of criticism — even from other Republicans — and yet, his polling numbers still continue to soar. In fact, the Washington Post noted in December that the more Trump is criticized, the stronger the resolution of his supporters gets, likely because the criticism feeds into Trump’s anti-establishment, “us vs. them” rhetoric. So even if Anonymous’ #OpTrump is successful, it still might not end up having the effect it intends.

But, regardless of the outcome, Anonymous’ message is still important, and reflective of a sentiment that many people in the country are feeling — concern about his message and what that represents, even if he doesn’t become the POTUS. Outward, blatant racism that now somehow seems more acceptable; sexism; discrimination; and just — let’s face it — general meanness, has been ushered into the public conversation along with Trump’s campaign. And it’s hard to believe that anyone, at this point, will truly be able to turn it around (and — dare I say it — make America great again).