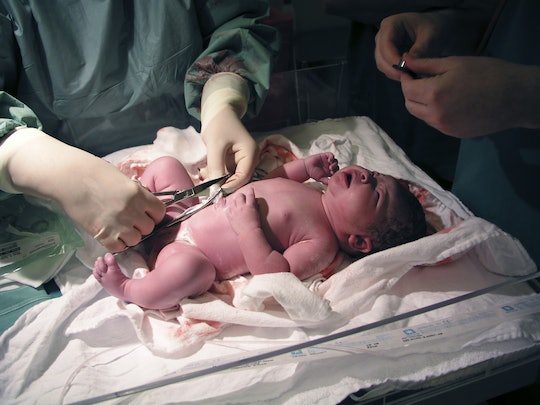 The Difference Between Cord Blood & Placenta Blood Because, Yes, There Is One

Most parents are familiar with cord blood, but another type of plasma can also come from the birth process: placental blood. This begs the question, how is cord blood different from placental blood, and what should parents know about these blood types? Although the terms are sometimes used interchangeably, there are some slight differences between cord and placental blood.

Lets start with cord blood. When a baby is born, the blood left inside the umbilical cord is known as cord blood, according to Baby Center. Because of its unique qualities, this plasma has gained the attention of medical researchers in recent years. In addition to the normal properties of blood, cord blood also contains hematopoietic (blood-forming) stem cells, according to the National Cord Blood Program (NCBP). The stem cells make cord blood useful for transplants, especially for patients with blood, immune, genetic, or metabolic diseases, as further noted by the NCBP. Because of its promising medical treatment, cord blood can be collected at birth and banked, according to the website for Parents. It can be donated to a public bank for free, or even stored at a private bank for potential future use by family members. Overall, cord blood's potential is still being studied, but it appears to hold great potential for all sorts of medical treatments.

Along these lines, the blood that stays in the placenta's vessels after birth is aptly known as placental blood, according to the Parent's Guide to Cord Blood Foundation (PGCBF). It shares many of the same properties as cord blood, but placental blood contains even higher concentrations of certain stem cells, many of which exist in a more immature stage of development, as further noted by PGCBF. Generally, the higher numbers of stem cells in placental blood may increase the odds of survival for transplant patients, according to Lifebank USA. If someone wants to bank the greatest number of stem cells from a birth, then collecting placental blood is worth consideration.

Although the use of cord blood and placental blood in medical practices are only beginning, their effectiveness among transplant patients so far shows tremendous potential. If you're expecting, then learning about the practice of cord and placental blood banking in your area may be helpful. Who knows? The stem cells in your infant's placental blood may save a life some day.