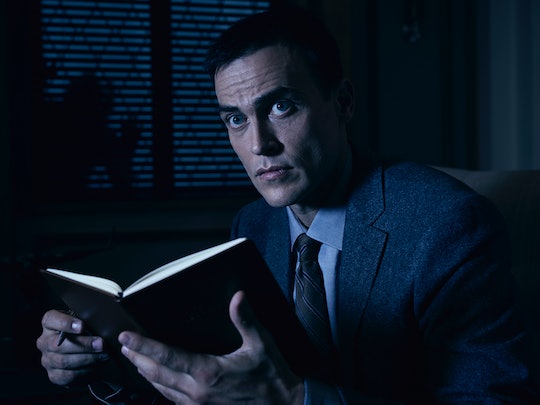 Dr. Rudy Is Connected To Kai In A Big Way On 'AHS: Cult'

In "Holes," American Horror Story: Cult finally started to dig a little deeper into the past of its central figure Kai Anderson. Kai has the uncanny ability to manipulate people into doing what he wants but his personal history was uncertain until Episode 5 revealed some surprising things — like the fact that Dr. Rudy Vincent is a part of the Anderson family. But how is Dr. Rudy related to Kai & Winter on AHS: Cult? The answer was one of the most surprising moments of the episode, and it proved that nearly every character on the show this season is connected to Kai in some way.

As it turns out, Dr. Rudy is Kai and Winter's older brother. That link was unveiled when Kai explained his dark family history to a curious Beverly, finally telling the truth after spinning lie after lie to his other followers. He told her that a motorcycle accident had left his father paralyzed and turned a formerly reasonable man into an abusive, angry jerk. When Kai's mother had reached her breaking point in the relationship, she took drastic action: she shot her husband and then herself, then left Kai to clean up the mess. He didn't know what to do, so he called "Vince" — his big brother.

While Kai has generally been the one to handle conflict in the bloodiest way possible, "Holes" indicated that he probably learned that lesson from his family. When Kai brought his brother home to help handle the situation with their parents, Dr. Rudy made one thing more than clear: while alerting the police would be the usual routine in a murder-suicide, they were definitely not going to do that. Instead, they would cover up what happened as best they could by locking up the bodies in the bedroom and covering them in lye to disguise the decomposition. Then the Anderson children would continue to receive the funds from their dad's accident settlement, his disability payout, and their mom's pension.

Something is deeply wrong within the Anderson family, and they keep perpetuating the troubling behavior without truly recovering from the trauma. Kai's mother felt violence was the only solution to her problem instead of seeking a separation or divorce; Dr. Rudy didn't even consider another option besides covering up his parents' deaths and consigning his younger siblings to sharing the house with the bodies. One would think that Dr. Rudy would have a better grasp on the psychological fallout of situations like this because he's a therapist, but that doesn't appear to be the case.

On top of teaching Kai and Winter the wrong way to handle a tough situation, Dr. Rudy also appears to be helping Kai out on his path to world domination. In a past episode, one of Rudy's patients and her husband were killed by Kai's followers in a way that played directly on her deepest fears. Rudy must have shared that information with Kai so that he could utilize it in the murder. Kai has also shown an intense interest in Ally, another of Vincent's patients. Doctor-patient confidentiality appears to be nonexistent with this guy, and he's using his inside information to give Kai even greater power over people.

Now that the connection between Dr. Rudy Vincent, Kai, and Winter has been revealed, Vincent might end up taking on a bigger role in the rest of the season. Kai may be leading the cult, but his siblings have an immense influence on him and Rudy has been shown to be the only person Kai looks to for leadership. Rudy was introduced as a secondary character, but fans should keep an eye on him from here on out. His influence runs deeper than anyone could have guessed.