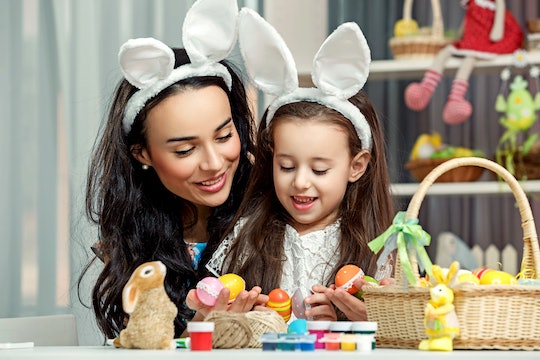 How Is Easter's Date Determined?

This year, Easter Sunday falls on April 16. Just last year though, it fell on March 27. If you celebrate the holiday for religious reasons or just enjoy indulging on all the colorful candy, you may be grateful for the extra time to prepare and shop. But you might also be wondering, "how is Easter's date determined," and "why does it sometimes land in different months." Well, it has to do with both the Gregorian calendar and the moon.

Christians believe Easter is the day that Jesus Christ was resurrected from the dead, so it's been celebrated for roughly 2,000 years. According to Time and Date, the Council of Nicaea decreed that Easter would fall on the first Sunday after the first full moon after the vernal equinox (i.e. the first day of spring) in the year 325. That means the holiday can end up occurring anywhere from March 22 to April 25 — a range of more than a month. According to the Independent, the timing of that first full moon changes every year because the 365-day calendar is based on a solar year, while a lunar year is a bit shorter at just 354 days. The shifting date of Easter means the Christian holidays leading up to it like Ash Wednesday and Palm Sunday also occur on different dates every year, which is why they're dubbed "moveable feasts" according to TIME.

To make matters all the more confusing, Eastern Orthodox Christians determine Easter's date with the Julian calendar according to Calendar Date. That means they often celebrate Easter one week later (I know many Orthodox Greek Christians who relish the ability to wait until Easter candy goes on sale to stock up and fill their children's' baskets on the cheap). According to The Old Farmer's Almanac, Easter for Orthodox Christians can fall anywhere from April 4 to May 8. But in some years, including this year, the calendars match up and both groups observe the holiday on the same day. There has been some talk about changing the systems so that all Christians celebrate on the same day, and there's even a petition about it online. According to the Catholic News Agency, Pope Francis is said to be on board with the idea, so perhaps in the future figuring out when Easter is will be a lot less confusing.