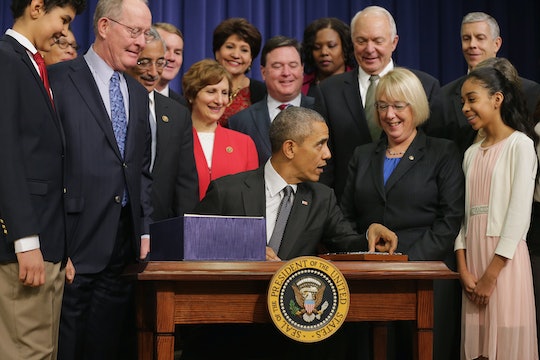 How Is Every Student Succeeds Act Different From No Child Left Behind? They're Actually Very Different

On Thursday, President Obama signed a new education bill, but it's still not super clear how Every Student Succeeds Act is different from (or better than) the No Child Left Behind Act. You might remember that President George W. Bush signed the No Child Left Behind Act way back in 2002 and it has been a controversial issue for anyone who pays attention to public education. Obama's bill is a little more flexible, according to supporters, in that it still puts a great emphasis on standardized testing, but gives school districts and teachers a little more flexibility in how they do it.

Flexibility is a good thing right? It was also a bipartisan bill, something pretty rare Washington in the last decade. President Obama called it "a Christmas miracle." But there are a few major, key differences between the laws that go a little deeper than just a more positive spin on their titles.

If you have kids in school or simply know anyone who has to work in one, the Common Core is a major point of contention all around. The Common Core was enacted by states after the No Child Left Behind Act. The new bill doesn't require states to adopt any Common Core Standards. In fact, it actually says that the Department of Education should stay out of it:

It's always about the dough. Every Child Succeeds is authorizing up to $24.9 billion to go to schools in 2016, which will have to be approved by Congress. No Child Left Behind authorized $32 billion, but since it's passing Congress spent nowhere near that. They've only authorized around $23 billion. Sometimes coming in under budget is a good thing. But much of the controversy surrounding No Child Left Behind is about how much money went into it and how it was divvied up. It remains to be seen if the reform of the laws changes how much cash we need to make it work.

For states, not the kids. There are a lot of new requirements in the new act about how schools check in with the Department of Education. No Child Left Behind required school districts to set "challenging" standards and pull all test scores for their states to report to the federal departments. When you hear educators complain about "teaching to the test," this is what they're complaining about. Every Child Succeeds, again, is a little more open to improvisation, leaving it up to the states with lessened oversight from the Department of Education.

States must set ambitious targets to close student achievement and graduation rate gaps among subgroups of students in order to meet their goals. In schools where too many students consistently fail to reach the goals and other indicators set by the state, school districts will ensure they receive tailored interventions and supports proportionate to the needs of those schools and the students they serve.

Overall, Every Child Succeeds is about giving more states the power to choose how they run their schools. Seeing how that plays out on the ground, and asking Congress to fund it as President Obama hopes, is a whole different story.

More Like This
20 Amazing Shows With LGBTQ+ Characters To Watch With Your Kids
14 Children & 1 Teacher Killed In Mass Shooting At Texas Elementary School
Multiple Jif Peanut Butter Products Have Been Recalled After 14 People Got Sick
Jennifer Lawrence Just Kinda, Sorta Revealed The Sex Of Her First Baby