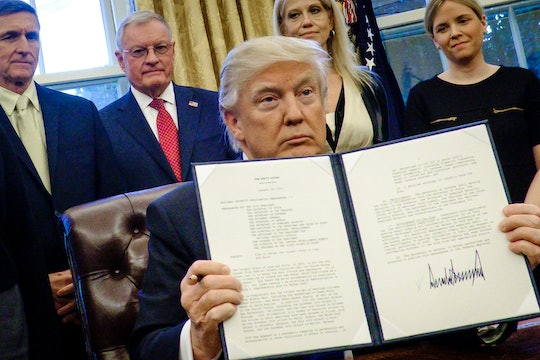 How Is An Executive Order Different From A Law?

On Friday, President Donald Trump signed an executive order indefinitely barring Syrian refugees from entering the United States, suspending all refugee admissions for 120 days, and blocking citizens of the following Muslim-majority countries from entering the United States for 90 days: Iran, Iraq, Libya, Somalia, Sudan, Syria and Yemen. A lot of people were not very happy about it, if the protests around the country this weekend were any indication. With the spate of executive orders Trump has been signing during the first weeks of his presidency, many are asking: how is an executive order different from a law, anyway?

President Trump has signed more than a dozen executive orders and memorandums since his inauguration day, Jan. 20. The orders and memorandums have been so numerous and signed so quickly that it has been a little difficult to keep up with news about them. It's also been a little tough to keep track of the differences between what he's signing, and to keep the facts straight about their legal status. So what are the differences between executive orders, executive memorandums, and a law? The answer lies mostly in where they come from, and the steps involved in how they come to pass.

The immigration ban in question was an executive order signed at 4:42 p.m. on Friday, and set off protests around the country throughout the weekend. It meant that, "students, visitors and green-card-holding legal permanent United States residents from the seven countries — and refugees from around the world — were stopped at airports in the United States and abroad, including Cairo, Dubai and Istanbul. Some were blocked from entering the United States and were sent back overseas," according to The New York Times. The action led to protests, court rulings blocking parts of the order, and statements from high-ranking officials weighing in.

Especially since lawyers, judges, and legal organizations have gotten involved in this particular order, people are wondering what exactly the differences are between the things Trump is signing, and laws. The three main components in question are executive orders, executive memorandums, and laws.

According to Phillip J. Cooper, a professor of public administration in the Hatfield School of Government at Portland State University, "an order is a call for the executive branch to take a specific action or to change an existing practice...Once a president signs an executive order, it's sent to the Federal Register for an identifying number, and then published." Cooper told NPR that, for a memorandum, on the other hand:

There are no legal processes required for issuing a memorandum. A president doesn't have to do anything, doesn't even have to publish it if he or she doesn't want to. With an executive order, presidents must publish.

Executive orders are numbered and published, and must cite the authority the president has to issue it. They can also be amended or rescinded by another executive order.

According to Cooper, executive orders and memorandums are often conflated. "In the last few administrations, particularly since the Clinton years, presidents started using the two interchangeably," he told NPR.

But they are not the same thing. The hierarchy of precedence matters, for one. According to USA Today:

Certain types of orders are given priority in publication in the Federal Register, and may take legal precedence. The hierarchy is: Proclamations, executive orders, presidential memoranda, presidential notices, and presidential determinations.

As explained in the tweet above, the immigration ban, or #MuslimBan, as many are calling it, that resulted from the executive order Trump signed Friday may violate existing law.

While an executive order or memorandum is issued by the president, a law starts as a bill in either the House of Representatives or in the U.S. Senate, and has to pass through both before being sent to the president. Remember meeting Bill on Schoolhouse Rock all those years ago?

Executive orders and memorandums are essentially ways the president can make sweeping policy changes without having representatives vote on those changes, which means the changes also don't have to be cleared with the American public, whom representatives, you know, represent.