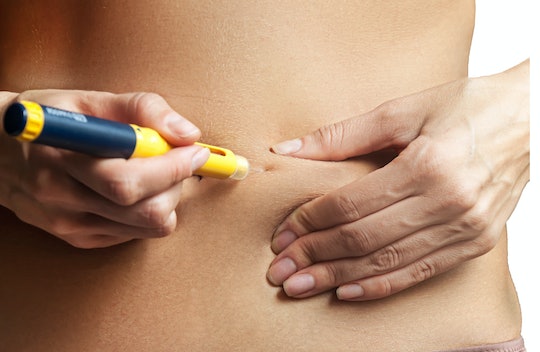 Here Are The Differences Between An IVF Pregnancy & A "Normal" Pregnancy

Thanks to many scientific advances in reproductive technology, there are multiple treatment options when it comes to trying to achieve family planning goals. And as these options become more and more popular, it's understandable if you're asking yourself, "How is an IVF pregnancy different from pregnancy resulting from unprotected sex?" In the field of assisted reproductive technology (ART) — which, according to the website for the American College of Gynecology, includes all fertility methods that handle both the sperm and egg outside of the body — one such method is In Vitro Fertilization (IVF). The experience of getting pregnant and being pregnant is, of course entirely subjective; whether you achieve pregnancy via IVF, another form of ART, or via unprotected intercourse. But are there things that women undergoing IVF experience that are different from women who get pregnant "the old fashioned way"?

An IVF pregnancy is different from pregnancies resulting from unprotected intercourse in a few ways. Mainly, in the method in which it is achieved, the emotional weight that it carries, and some of the risks that are involved in the resulting pregnancy itself. First, let's talk about exactly what IVF is and why you might seek IVF in the first place. The Mayo Clinic defines IVF as, "a complex series of procedures used to treat fertility or genetic problems and assist with the conception of a child." According to The American Pregnancy Association (APA), IVF can be used to treat patients with blocked or damaged fallopian tubes, women with ovulation disorders, women who have had their fallopian tubes removed, individuals with genetic disorders, as well as men with fertility problems. Sometimes, as the Mayo Clinic's website notes, IVF is offered as a primary treatment for infertility in women over age 40.

IVF is the most commonly used procedure of all the assisted fertility treatments available, and according to Baby Center, accounts for over 99 percent of ART procedures in the U.S. (Other popular ART procedures include Intracytoplasmic sperm injection, donor egg or embryo, and surrogacy). The most important factor that affects the success rate (defined by the delivery of a healthy child) of IVF treatment is age. The most recent data from the Society for Assisted Reproductive Technology shows a 41.2 percent success rate in women under age 35, and a 33.1 percent success rate in women ages 35 to 37. The rates of success drop as age increases.

The Mayo Clinic describes IVF as having occurred when a mature egg is retrieved from a woman's ovaries and fertilized by sperm in a lab setting. When the egg is fertilized it is called an embryo, and that embryo is then implanted in the woman's uterus. IVF treatments are described as "cycles," and a typical cycle is, according to Baby Center's website, usually two weeks. After two weeks, a doctor determines whether the embryo implanted on the uterine wall (which would mean a successful pregnancy and reason to celebrate).

A little pause here. According to the APA, part of the process of IVF for some women involves trying to produce eggs in the first place, usually with the help of fertility medications. This part alone can be exhausting and trying, before even getting to the point of having a mature egg in your ovary to use for the insemination process. Already this is way more involved than the simple "charting" or the setting of a romantic playlist that simpler methods of getting pregnant involve.

On the emotional side of things, women seeking IVF often feel like there is a perceived stigma associated with the fact that they have to go the route of IVF in the first place. When we look at some of the numbers, the amount of people who have been conceived via IVF, according to Forbes, is pretty significant. As Forbes reports, as of 2014 one in 348 people in the U.S. was an IVF baby. So while more and more people seek fertility treatments such as IVF, people are still hesitant to be open about it.

Research shows that IVF can cause anxiety in patients undergoing the process. A 2013 study published in the US National Library of Medicine (NLM) National Institute of Health (NIH) examined the many stressors associated with the IVF process, including the threat of infertility, the daily injections, the blood draws, the egg retrievals, the possible failure of the process at any point along the way, and the possibility of miscarriage. Though the study found a statistically significant association between anxiety and live birth rate among participants, they did not find that high levels of anxiety resulted in an "adverse pregnancy outcome." The physical, emotional, and financial stress of IVF is a lot to deal with, on top of the usual pregnancy chaos that "regular" pregnant women experience.

There are a number risk factors associated with an IVF pregnancy that are different from those resulting from pregnancies from unprotected intercourse. As APA notes, the chance of having multiples (more than one embryo) increases with the use of fertility treatment. According to the Mayo Clinic's website, IVF also increases the risk of ectopic pregnancy, with 2-5 percent of women who undergo IVF experiencing ectopic pregnancies. The Mayo Clinic's site also states that some research shows there is a slight risk associated with IVF and low birth weight or premature delivery (because pregnancies involving multiples tend to have earlier delivery dates).

Lastly, the expense of IVF cannot be overstated. Most insurance companies do not cover IVF, and the cost of a single cycle, according to the APA, can range from at least $12,000-$17,000. That's quite a stressful pill to swallow.

According to Dr. David Barad, Senior Scientist and Director of ART at the Center for Human Reproduction in New York, the main difference between a "normal" pregnancy and IVF pregnancy is in the factors leading a couple to seek IVF in the first place. Dr. Barad tells Romper via email:

"Once established, an IVF pregnancy is a normal pregnancy, with all the promise and risks that come along with being pregnant. What's different when a couple needs to use IVF to become pregnant is that IVF was needed. The risks associated with pregnancy will depend on what factors are involved in the infertility in the first place. Age, anatomical factors, endocrine factors or immunological factors might all impact on the success of a pregnancy."

In other words, a rose, is a rose, is a rose. While IVF pregnancies and pregnancies achieved by unprotected intercourse differ greatly in method of conception, the actual pregnancies are not all that different in their inherent risks. There are more stressors attached to an IVF pregnancy, but so far, research has not shown a significant adverse effect of those stress levels on actual pregnancy outcomes. Perhaps the biggest difference between the two pregnancies, is the gap in your bank account that you'll likely experience if you've gone the IVF route.