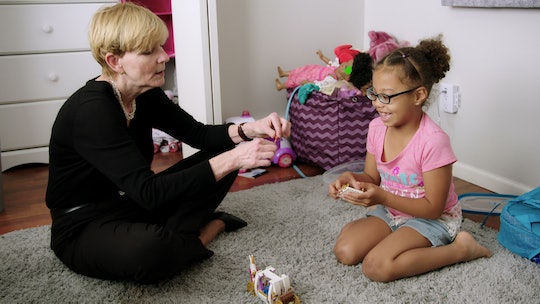 Kamiyah's Heartbreaking Story On 'Diagnosis' Left Me In Tears

Kamiyah is one of the youngest patients on Netflix’s medical documentary series, Diagnosis. After her story was shared by Dr. Lisa Sanders as part of her New York Times medical column, Kamiyah’s mother, Breteni, learned that her daughter’s sporadic seizures were caused by a genetic mutation. Since then, Breteni was contacted by numerous families with the same diagnosis, as well as medical researchers working on a cure. After watching her heartbreaking story, many are wondering, how is Kamiyah from Diagnosis now?

In Episode 4 of the docuseries, Breteni shares what life is like for 6-year-old Kamiyah. “We are living day to day with a rare disease,” she says. “When it happens, she's paralyzed, meaning everything is paralyzed: lungs, everything. It just sounds like she is losing her ability to intake a breath. And then it’s like a light switch turns back on, and her brain’s back. It usually lasts anywhere from three to 20 seconds, and according to the calculations of when we did a clicker test, it was over 300 times a day.”

Breteni discovered that Kamiyah’s condition stems from a rare pathogenic mutation of the gene called KCNMA1. On the show, she is contacted by Dr. Andrea Martin, a scientist from the University of Maryland School of Medicine whose life’s work is studying this specific gene. After reading Kamiyah’s story in the New York Times, Martin said this was the first patient with this gene mutation that was identified publicly, so reached out to Breteni, and offered to test Kamiyah’s genes in a lab to see what kind of drugs could potentially help her.

In the episode, Martin explains how the gene mutation causes the intermittent paralysis Kamiyah experiences. “We study an ion channel called KCNMA1,” says Martin. “This is a very unique type of potassium channel. The channel controls how much potassium actually goes out of the cell, and this potassium affects a variety of different physiological processes, from how neurons in the brain talk to each other, to how muscles contract. Potassium channels in general dampen the excitability of neurons and muscle, and so it’s very easy to imagine that if you have dysfunction in a potassium channel, that that can cause hyperexcitability in the brain, like seizure, or hyperexcitability of the muscle.”

After joining a Facebook group comprised of families affected by the KCNMA1 mutation, Breteni met a Danish mom named Lissi, whose son Atle has seizures similar to Kamiyah. At the end of the episode, viewers learn that Dr. Martin will be testing both Atle and Kamiyah’s genes in the lab this year, in an effort to find medicines that may help them. Viewers also learn that Breteni was contacted by Q-State, a private biotech company that specializes in neurological disorders which offered to help Kamiyah find a drug treatment free of charge.

Hopefully, with all the attention Kamiyah’s condition is getting from the medical community, researchers will be able to develop a treatment plan that can help her and others like her live a healthy, happy, and productive life.

Diagnosis is currently streaming on Netflix.