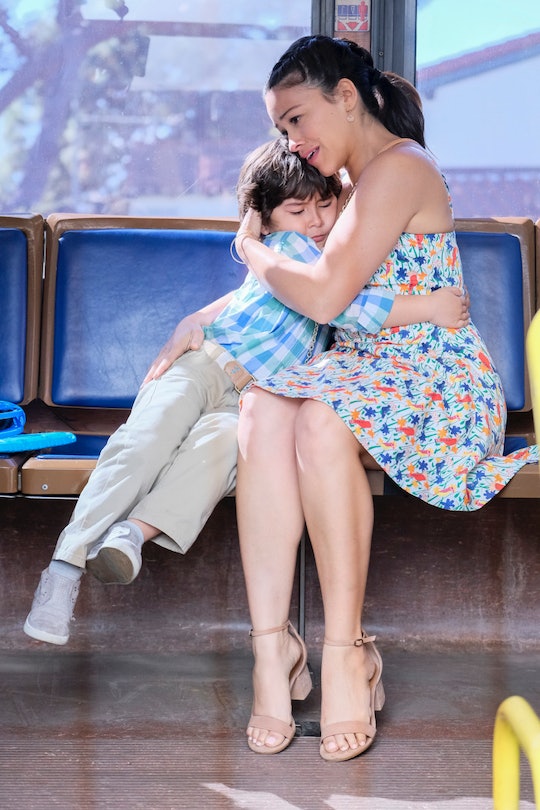 Jane the Virgin has delivered some shocking twists throughout its four seasons on the air, but I don't think anything can top the huge reveal the series dropped during Friday's Season 4 finale. In the final few moments of the episode, Rafael opened the door to find Michael (yes, that Michael) on the other side. So how is Michael alive on Jane the Virgin? Unfortunately, aside from showing the formerly, thought-to-be deceased character, nothing else was really explained. But it's clear that Season 5 just got way more complicated.

As I'm sure all Jane the Virgin fans recall, Michael died suddenly at the end of Season 3, and even though Season 4 included a three-year time jump, the tragedy was still felt heavily by all the characters — none more so than Jane. Fans saw her grieve his death and struggle to move on for the sake of her son, Mateo. But it was clear Michael was the love of her life and someone who would always hold a special place in her heart. Viewers, too, had a difficult time coping with his death, especially since there seemed to be no possible way he could ever return. His death seemed permanent and something no one was questioning. Surely if there was anything shady about Michael's death, Jane would've been onto it, right? Well, apparently not because that was definitely him on the other side of the door that Rafael opened. So what gives?

I'm sorry to say that I have no concrete answer for you. This proved to be just as shocking to me as it was for everyone else. Throughout the entire episode, viewers (and Jane) were led to believe that the life-changing news Rose (aka Sin Rostro) had to tell Rafael would be something regarding his biological parents. But that wasn't the case. The reason Rafael seemed so distraught was because he knew Michael was alive. Not that Rafael didn't want Michael to be alive, but rather he knew this would mean he could lose Jane all over again.

But in regards to how he came to be alive when he's been "dead" for over three years has yet to be revealed. The episode ended immediately after the big cliffhanger, leaving us unable to do anything but speculate about it for the entire summer. Why did Rose know this? Has she been hiding him for all this time, and if so, why? We know all too well that Rose has the ability to hide someone's real identity, so perhaps she switched Michael's body out with someone else's somehow?

It's possible, but it still doesn't make sense considering we have no idea what the motive behind this would be. There's a reason Rose kept Michael hidden from Jane — and there also has to be a reason why she's decided to bring him back now. Knowing Rose, though, it can't be for a good reason.

That being said, I'm thrilled to have Brett Dier (who plays Michael) back on the show. I've always been an avid #TeamMichael supporter since Day 1. However, I can't deny that there is a part of me that does feel bad for poor Rafael. This guy just can't get a break. Sure, Jane is in love with him, but now that Michael's back in the picture, things could end up changing back to how they once were, especially since she's still technically married to Michael.

Will she still want to be with Rafael even now that Michael is alive? Fans will have to wait until Season 5 to find out one way or the other. But until we know where he's been and why, perhaps the whole love aspect of the story should be put on the back burner — at least for now.