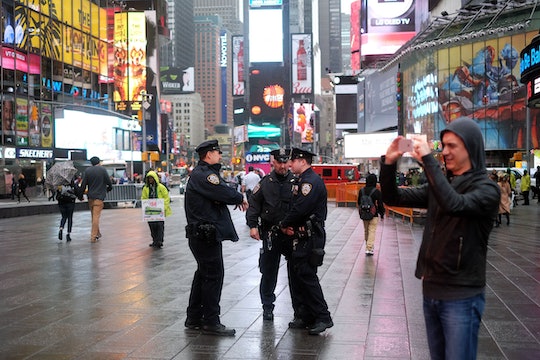 How Is NYC Protecting Itself From ISIS & Other Threats?

In the wake of the terrorist attacks on Paris Nov. 13, officials all over the world have tried to reassure their citizens that they are safe. However, on Wednesday an ISIS propaganda video depicting New York City landmarks put many New Yorkers on edge. In an effort to relieve anxiety, city officials from the NYPD to the city’s mayor testified that New York is secure, but those who didn't hear those statements or are skeptical of them might well be asking how New York is protecting itself from ISIS.

According to CBS New York, the video starts off with depictions of French President François Hollande post-Paris attacks and is coupled with commentary from what is believed to be ISIS militants. The part that specifically concerned New Yorkers is footage of Times Square, NYC taxis, locations in Midtown — looped with images of a male who has a bomb strapped to himself. Though the video does allude to an attack on NYC, the suicide bombers are not depicted in the Big Apple.

Even if the threat is false, the question remains: What is being done to guard against an attack on New York?

Not only is the NYPD aware of the video, but they admitted in a statement that the threat proves “that New York City remains a top terrorist target." They also pointed out that they have been making changes since the Paris attacks. In fact, on Monday the force introduced an elite counterterrorism squad where officers — 560 by the end of 2015 — are trained to fight any terrorists who may enter the city. According to NYC Mayor Bill de Blasio, the squad will be activated starting New Year’s Eve. The NYPD also wrote in the statement:

In addition, we are continuing to deploy additional Critical Response Command (CRC) teams throughout the City, out of an abundance of caution.

and on Twitter called the propaganda video a "commercial" selling fear.

Though the NYPD released a powerful statement, police Commissioner Bill Bratton and Deputy Commissioner of Intelligence and Counterterrorism John Miller have also weighed in on the video. The two have mainly talked about how citizens are most helpful if they do not let fear take over. Bratton also pointed out that the NYPD is also working with the FBI and other agencies to ensure safety. He urged, “We cannot be intimidated, and that’s what terrorists seek to do. They seek to create fear. They seek to intimidate. We will not be intimidated, and we will not live in fear.”

Miller doubled down on Bratton's comments, pointing out that they are working hard to address concerned citizens' 911 calls — even when they turn out to be nothing. Speaking with CNN, the Deputy Comissioner went on to say:

So yes, we’re getting more calls, we’re going on more runs, we’re looking at more suspicious packages, we’re checking out more specific people when we get a call about a specific individual. But that is what we’re looking for, and that’s what’s what we do

New York Governor Andrew Cuomo was vocal about New York safety precautions taken following the Paris attacks. However, Cuomo, who also took to Twitter to reassure everyone, echoed Bratton when he urged citizens to stay alert and not to let these threats disrupt daily life. Cuomo's lengthy press release also mentioned that he “directed state agencies to enhance their preparedness out of an abundance of caution and remain in close contact with local and federal authorities, including the FBI and NYPD, through the Joint Terrorism Task Force, and that vigilance continues today.”

As expected, NYC's mayor Bill de Blasio has been at the forefront of trying to quell the public's fears and concerns. At Wednesday’s news conference, de Blasio claimed the citizens’ resilience will get them through these tough times. He said, “The people of New York City will not be intimidated. We understand it is the goal of terrorists to intimidate and disrupt our democratic society. We will not submit to their wishes.” Following the conference, de Blasio also tweeted a statement which mentioned Times and Herald Square — two locations shown in the ISIS video — and said that the rest of the city will be protected by the NYPD and other agencies who are “taking all necessary security precautions” to give all New Yorkers the peace of mind that they can roam the city unharmed.

More Like This
10 Ways Prince George & Prince Louis Are So Different From Each Other
Is It Safe To Keep Using Period & Fertility Apps In A Post-Roe America?
Some Movie Theaters Are Banning Teens Dressed In Suits As Part Of Viral 'Minions' Trend
12 Of The Best Hallmark Christmas Movies To Watch In July