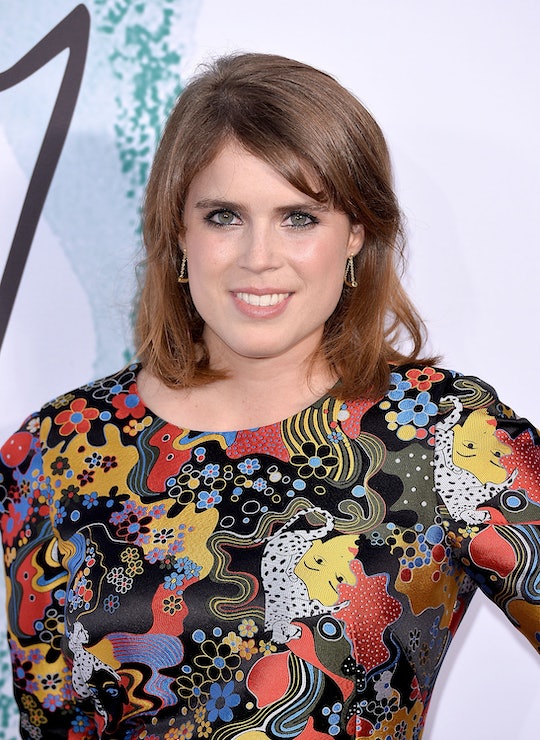 Princess Eugenie & The Queen Have A Close Family Connection

Another member of the British royal family is getting married very soon. Princess Eugenie attended the wedding of her cousin, Prince Harry, and soon she'll tie the knot in royal style as well. She's definitely a royal, but how is Princess Eugenie related to the Queen? Queen Elizabeth has quite the impressive family tree, and Princess Eugenie is on it.

Princess Eugenie and her fiancé, Jack Brooksbank, announced their engagement in January, and are scheduled to get married on Oct. 12, according to People. In fact, she's getting married in the same venue that Prince Harry and Meghan Markle did: St. George’s Chapel at Windsor Castle. They're also inviting members of the public from around the United Kingdom to attend, just like Princess Eugenie's cousin did for his nuptials, the outlet reported.

You might be aware that Princess Eugenie is Prince Harry's cousin, but family can get complicated. So what exactly does that relationship mean when it comes to the Queen? How exactly are Princess Eugenie and the Queen related? They reportedly have a "close bond," and are directly related — as grandmother and granddaughter.

In fact, Princess Eugenie is one of the Queen’s four granddaughters, Town & Country reported in May. One of those other granddaughters is her older sister, Princess Beatrice, who is expected to be a big part of her little sister's big day.

Princess Eugenie's father is Prince Andrew, Duke of York, and he is the third child of the Queen, Town & Country reported. He married Sarah Ferguson, Princess Eugenie's mother, on July 23, 1986. She is affectionately known as “Fergie,” but she's not the pop singer, for the record.

Princess Eugenie and the Queen have such a close familial connection, Princess Eugenie is actually ninth-in-line to the British throne, according to The Daily Express. Her sister is just ahead of her. The outlet reported that Princess Eugenie has a title specifically because she is the daughter of one of the Queen’s sons, and that if she wants to, she has the option to drop her royal title when she marries Brooksbank, but she probably won't end up doing so.

Princess Eugenie is a big enough deal in the royal family that Buckingham Palace put out a statement about her engagement on Twitter. And in July, the Palace officially announced that members of the public would be invited to the ceremony. The statement read, according to People:

Princess Eugenie and Jack Brooksbank would like to invite members of the public to join their wedding on 12 October, 2018, to attend inside the Precincts of Windsor Castle. 1,200 members of the public will be able to view the arrival of the congregation and members of the royal family, listen to a live broadcast of the marriage service and watch the start of the procession as the couple depart at the end of the wedding ceremony.

It's likely that Princess Eugenie's status as one of the Queen's granddaughters afforded her a little more attention than many would get for their wedding.

Queen Elizabeth has eight grandkids, including Princess Eugenie, and seven great-grandchildren, Town & Country reported in August. That's quite the legacy, outside of the legacy she already has as the world’s longest reigning monarch.

One of the Queen's grandchildren, Zara Tindall — the daughter of Princess Anne and Captain Mark Philips — recently gave birth to a baby girl named Lena Elizabeth, after the Queen. Perhaps if Princess Eugenie and her new husband decide they want to have kids, she'll honor her grandmother in a similar way.

More Like This
Kate Middleton's Brother Paid Tribute To Queen Elizabeth With His New Puppy's Name
Queen Elizabeth's Corgis Will Be "Spoiled Rotten," According To Prince William
Kate Middleton Has A Nice Theory About The Rainbow Sightings After The Queen's Death
The Cannon Legacy Is Strong: Here's A Look At All Of Nick Cannon's Kids