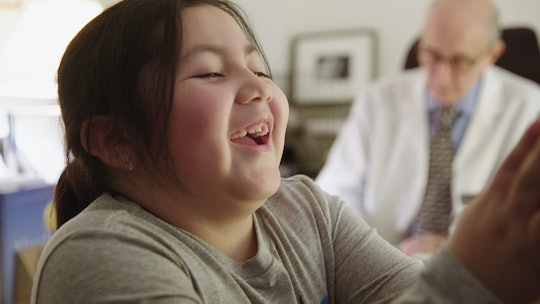 Sadie was one of the youngest patients of Dr. Lisa Sanders in the recent Netflix medical docuseries Diagnosis. Doctors only know she has a rare seizure disorder and might require a hemispherectomy, surgery to remove half of her brain, in order to stop the seizures. How is Sadie from Diagnosis now? Her mom Sara sought Dr. Sanders' help to confirm a diagnosis before committing Sadie to a surgery that would permanently change her quality of life.

Since December 2017, Sadie has experienced seizures of varying types and frequencies. After many tests, doctors, and hospital visits, when she began having seizures located in one part of the body while the patient is awake and has no control over (called epilepsia partialis continua or E.P. C. seizures) pediatric epilepsy specialist, Dr. Tristan Sands, diagnosed Sadie with Rasmussen’s encephalitis, a disorder "caused by inflammation limited to a single side of the brain," according to Dr. Sanders' original "Diagnosis" column.

Rasmussen’s encephalitis is "a progressive disease and results, over the course of just a few years, in the destruction of the affected side of the brain." Dr. Sanders continued. It's not very well understood, which is part of the reason Sadie's parents have to decide about brain surgery. Sadie's parents have exhausted all specialist options and while most doctors think she has Rasmussen’s encephalitis, they had yet to make their final recommendations about treatment when the column was published.

The most up-to-date information I found regarding Sadie's health and treatment comes from a GoFundMe page that seems to be run by a friend of Sara's named Lauren. In a post titled "Update 3" posted about eight months ago Lauren posted an update from Sara on Sadie's health. "Sadie is still experiencing frequent leg seizures that vary in strength, but she’s in school right now, which is always good."

Sara shared that the campaign to help Sadie has gone viral, and told supporters about concrete progress that came from Sadie's participation in Diagnosis. "The doctors believe that Sadie is a good candidate for a neuro stimulation device (RNS) that could potentially aid with seizure control in a way that medication has never been able to do," she said. "The way it was described to us is as a pacemaker for the brain." A group of electrodes would stimulate the part of the brain about to have the seizure, but there is no guarantee that this course of treatment would work.

Sadie has "new team of doctors who believe that Sadie is incredibly high functioning and that a hemispherectomy is not the right choice for her at the moment," Sara said, before sharing news that Sadie's teachers were making bracelets as a fundraiser for her.

It's great to hear that a new team of doctors is giving Sadie and her whole family hope, and that Sadie is functioning well enough to be in school.

Diagnosis is streaming on Netflix now.

More Like This
17 Baby Names Inspired By 'The Great British Bake Off'
Here’s How To Watch The National Dog Show On Thanksgiving Day This Year
'Virgin River' Has Wrapped Filming Season 5 & OMG Is Charmaine Still Pregnant!?
Rubble From 'PAW Patrol' Is Getting His Own Spinoff Series Full Of "Messy Demolition"