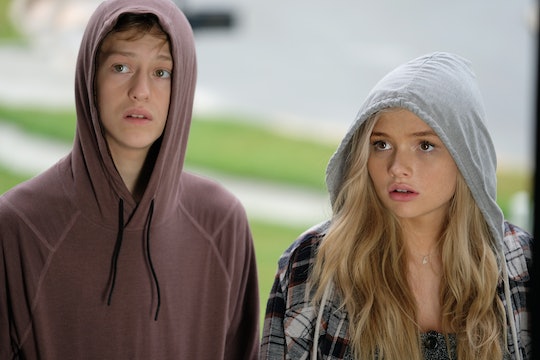 Here's How 'The Gifted' Connects To The 'X-Men' Movies

Mutants are coming to FOX in the all new TV series, The Gifted. However, it's not the mutants Marvel fans have come to know and love on the big screen. So how is The Gifted connected to the X-Men, if at all? Well, it's a little complicated.

While The Gifted does take place in the same universe as X-Men, the events of The Gifted are happening in an alternate reality. For reasons yet to be explained, the X-Men don't exist in this world. That's not to say they never existed. It's just that, for some reason, they're gone now, leaving the rest of the mutants to defend themselves against those who would like to be rid of them. Thus, the mutants on this show will most likely become their own superheroes.

Those mutants include Lauren (Natalie Alyn Lind) and Andy Strucker (Percy Hynes White), the two siblings whose abilities are revealed during an incident that occurs at their high school dance. The pair's father, Reed (Stephen Moyer), is a lawyer who prosecutes mutants for a living, and thanks to his job, he's familiar with other mutants who he turns to for help. Disregarding his job in order to protect his family, the Struckers, which includes mom Kate (Amy Acker), go on the run and join a group of misfit mutants.

Amongst that group are Lorna Dane/Polaris (Emma Dumont), Blink (Jamie Chung), Marcos Diaz/Eclipse (Sean Teale), and John Proudstar/Thunderbird (Blair Redford). It's clear from the trailer that Marcos is the leader of the group, as he's the one that Reed works with in order to get protection for his family. In exchange, Marco wants one thing and that's information about Lorna, who seems to be his girlfriend.

Lorna was captured by the people Reed used to work for, and it's clear she's not exactly being treated well. What's unclear is how and when she was captured and for what purpose? The government obviously wants the mutants in custody, but is it really to protect the public as they claim, or do they have some other nefarious plans for them? It's difficult to say for sure, but perhaps that'll be something that's discovered over the course of the 10-episode season.

For now, all fans need to know is the show is filled with plenty of action and some heartwarming familial interactions. Although the show hasn't received an exuberant amount of praise, most critics are saying it's a great start to a new series in the Marvel Cinematic Universe. Sure, the show has room to grow, but that's what second seasons are hopefully for. At least the series seems to be starting on the right foot and one can only assume the show will go up from here.

The Gifted isn't the only new Marvel series to premiere this fall. ABC added another Marvel series to its line-up with Inhumans, which premiered last week. Following The Gifted, Freeform, which is under the same Disney umbrella as ABC, will be bringing it's first Marvel series to it's line-up in 2018. The show, Cloak & Dagger, follows two teenagers from two very different backgrounds who wake up with superpowers that mysteriously link them together. The show stars former Disney Channel star Olivia Holt and Aubrey Joseph.

Marvel obviously has a lot in the works for the small screen, and while some may not live up to the hype, that doesn't mean you shouldn't at least give them a try. You can watch The Gifted when it premieres Monday, Oct. 2 on FOX at 9 p.m. EST.