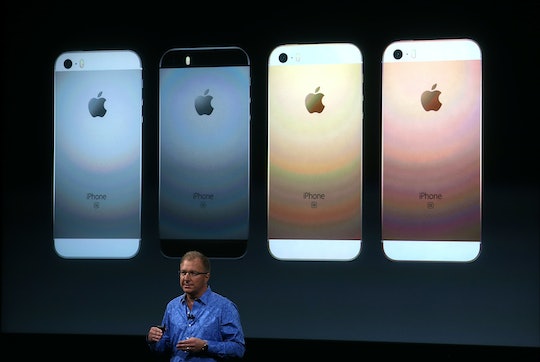 How Is The iPhone SE Different? Apple Announced The New, Smaller Option

It’s a big day at Apple HQ in Cupertino, California: a smaller, cheaper iPhone called the iPhone SE was announced Monday by Apple CEO Tim Cook. How is the iPhone SE different from previous versions? There’s been much speculation and excitement about the latest offering, which, according to the Los Angeles Times, will be a more accessible version of the company’s flagship product. With a lower price point, the iPhone SE is ideal for consumers who don’t need (or can’t afford) all the bells and whistles of an iPhone 6 of iPhone 6S, while still being new and top-notch. But anyone looking for a bigger, better, more impressive iPhone 6 successor will be disappointed — according to Yahoo!, some of the more exciting features of the last iPhone incarnation have been left out of the new model.

Why release the iPhone SE if it’s not exactly a step up? It sounds like it’s more of a step sideways: a product option to meet the needs of customers who aren’t buying top-of-the-line technology. In a way, the iPhone SE is to the iPhone 6 what the iPad Air is to the iPad Pro — still an updated, quality product worth getting excited about, but made for a different target demographic. According to Mashable, the iPhone SE could help Apple to grow its business in places like India and Latin America, and, according to the Telegraph, could also be a way to encourage the approximately “31 million iPhone 5s users in the US” to upgrade their iPhones (in comparison, only 11 million people are using the iPhone 6 or 6S).

So, what exactly can we expect from the iPhone SE? There are a few key differences.

Most notably, the iPhone SE is much smaller than the iPhone 6, sharing the same four-inch display of the iPhone 5 and 5s, according to Mashable. This contributes to its affordability, but also highlights another drawback of the larger iPhone 6, which is that, well, some people just prefer smaller phones. According to the Los Angeles Times, a smaller iPhone is likely to appeal more to customers who take their phones with them on a run, for example, or even just people who have smaller hands and find a smaller phone more comfortable.

The price is another important feature of the iPhone SE. Starting at $399 for a 16GB model, and $499 for 64GB, the iPhone SE clocks in $250 cheaper than an iPhone 6. This also makes the SE a more viable option for people looking to purchase their phones outright — something that is becoming more common, says the Los Angeles Times.

So if the iPhone SE looks more like an iPhone 5, how does it actually perform? Mostly like an iPhone 6 and 6S, seems to be the answer. The iPhone SE features an A9 processor, which is the same chip found in the iPhone 6S, and is an upgrade from the iPhone 6's A8 chip, according to Mashable. It also features an M9 motion coprocessor, a 12MP iSight camera, faster LTE, improved battery life, and the updated iOS 9.3 operating system (which, will also be available to download beginning today, according to Fortune). Also worth noting: the camera on the SE doesn't bulge out like it did on previous models.

But there is one major feature of the iPhone 6 that the iPhone SE does not have: 3D Touch. That marks perhaps the most significant difference for the new offering — while it is a cheaper, well made phone with improved specs, it doesn't offer some of the more cutting-edge technology of the higher-end iPhone models. But then again, given the price difference, it makes sense that it wouldn't come totally fully-loaded.

The iPhone SE will be available for pre-order on March 24.