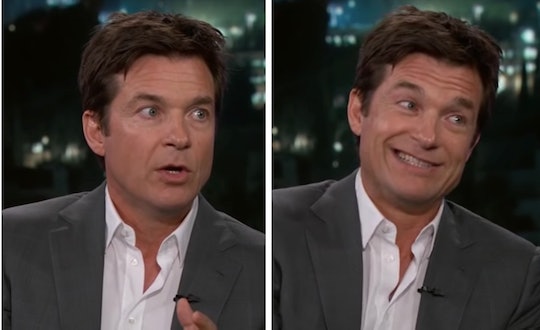 Actor Jason Bateman knows a thing or two about being funny, but it was no joke when he had to deal with one of the hardest questions a parent faces: Are these stories we tell about characters who leave chocolate eggs in spring, or fancy toys in winter, real? In fact, the story of how Bateman broke the news about the Easter Bunny, Santa, and the Tooth Fairy to his daughter, even though he knew his wife would kill him, is truly hysterical.

The actor recently relayed the whole tale on Jimmy Kimmel Live!, according to PopSugar, and it's so funny, you might find yourself howling. It seems that while filming his latest show — Netflix's Ozark — the star spends half the year away from his Los Angeles home on location in Georgia. All of which means he's often away from his family, which includes his wife, Amanda, and two daughters, 11-year-old Frannie and 6-year-old Maple, according to the Daily Mail.

Knowing he hasn't been spending much quality time at home, the celeb dad volunteered to take each kid with him to the set for a couple days for one-on-one bonding, starting with his oldest, Frannie, as he told host Jimmy Kimmel. Sounds good, although his wife had doubts about his loose style of "daddy daycare" and the need to remember such details as time.

But as Bateman memorably told Kimmel, the parenting gaffes started before the car was even at the airport, proving his spouse all too right.

"We're going to the airport and things are going well," Bateman began to tell an already-laughing Kimmel, himself the father of a boy and girl. "I talked about the Easter egg hunt the day before [and she said] 'Daddy, here's what I don't understand; bunnies don't lay eggs... The Easter Bunny's not real, right?' And I'm like, 'What are you talking about?' I'm approaching a blackout of nerves at this point. I say, 'I think it's real,' [but] I'm starting to panic... She says, 'I don't want you to lie to me right now because there's a few kids in class who say it's not real and I don't want to be an idiot. Pinkie-promise with me that the Easter bunny is real."

Poor Bateman! What's an honest dad to do but to keep going, right? "I said the Easter Bunny's not real," the actor told Kimmel. "I can't lie to the kids and break the pinkie-promise."

Bateman continued to tell Kimmel, "She says, 'This makes sense. But what doesn't make sense is the Tooth Fairy. I don't understand.' So I'm sweating and I catch the eye of the driver!"

Of course, the rest of the car ride devolved into the end of Frannie's childhood beliefs of these mystical characters, with a detour from the inconsistencies around the Tooth Fairy story to the whole question of big guy himself, Santa. Ultimately, Bateman just had to tell his daughter the truth. Sigh. I've been there, Jason, and it's a sorry day when you have to have an honest talk with a too-curious and too-observant child about all these things...

Now, as Bateman relayed to Kimmel, once he had let the cat out of the bag, he would soon have the report the bad news to the big guns — his wife, Amanda. "Now I gotta text my wife that I've ruined [things]," the actor continued. "My wife answers in all caps that I'm a professional liar for a living and I can't get through this?! [But she asked to] make [Frannie] pinkie-promise not to ruin it for the 6-year-old. So Maple's safe."

You can watch the whole, hilarious clip here:

Phew! Crisis averted, sort of. Seriously, though, Bateman — who received a star on the Hollywood Walk of Fame last year, according to ABC News, and co-stars in the Netflix show with Laura Linney, as reported by the Daily Mail — sounds like a fun and super-relatable dad, and it could have happened to any parent.

Parents know their own kids best and Bateman clearly understood that his daughter was ready to hear the truth. According to experts, the "right" time to tell your kid the truth about fairy tales and all the rest of childhood's magic varies per individual child — and when your kid asks you directly, it's probably because he or she is ready to hear the truth, according to WebMD.

Still, maybe Bateman and his wife should practice a little role-playing for the next conversation, the birds and the bees...