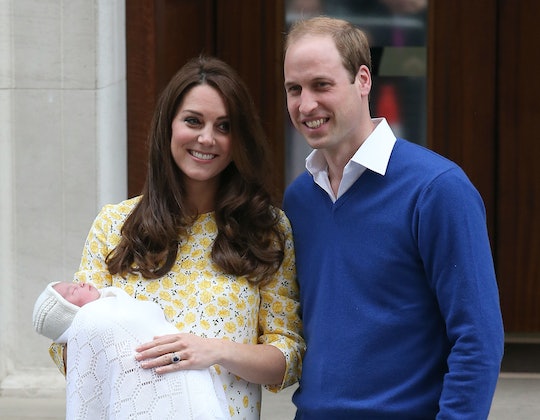 Here's How Kate Middleton & Prince William Will Announce The Birth Of Royal Baby No. 3

With just days away until Kate Middleton is expected to give birth to the next royal baby, the entire world is practically on the edge of their seats waiting for the big announcement. But don't expect the royal parents to share the news in a sweet, but simple Instagram post or release a brief statement to a publication. No, how Kate Middleton and Prince William will announce the birth of the third royal baby is actually very complex and happens in a few steps.

Perhaps unsurprisingly, there are some specific protocols for royals to follow after they give birth, according to the BBC. Of course, everyone will know when Middleton heads to the hospital, as she's previously given birth to both Prince George and Princess Charlotte at St. Mary’s Hospital, according to Town & Country, so as soon as she is spotted there, the world will just have to wait until an announcement is made.

Looking back at the births of both Prince George and Princess Charlotte, it's clear that the royal couple is used to following the royal standards set before them after their baby is born. Obviously, though, the happy couple will be able to spend some alone time with their newborn before making the official announcement, just as they did with Prince George back in 2013. Prince George was born at 4:24 p.m., according to The Daily Express, but his birth wasn't announced until 8:30 p.m. that same evening, giving Middleton and Prince William just a few hours of bonding time. When Princess Charlotte was born, at 8:34 a.m., the family also waited, this time until 11:10 a.m. to make the official announcement, according to CBS News.

So, how will it go down the third time around? Here's what you should expect.

The Queen Is The First To Know

Yes, given that she is the queen, it's really no surprise that before any public announcement is made, Queen Elizabeth II is informed of the birth of her great-grandchild before anyone else. According to Today's Parent, people have always waited outside of "St. Mary’s Hospital, in London, for a Kensington Palace staffer to leave its doors with a sealed envelope…to deliver the news to the Queen, Prince Charles and the Middleton family."

However, according to Marie Claire, "Protocol dictated that Prince William call his grandmother on an encrypted phone upon Prince George's birth." Either way, though, the queen is getting first dibs on a celebratory glass of champagne and piece of chocolate.

Then Comes The *Official* Birth Announcement

After the family has had some time to bond and the queen has been informed of the birth, Middleton and Prince William will likely give the OK for the official announcement to be placed outside of Buckingham Palace. However, when Prince George was born, the royal couple also decided to announce the birth on Twitter and email, according to The Telegraph, so it's unclear whether they'll do the same with baby number three. With Princess Charlotte, a digital press release was also put out before the palace announcement, The Guardian reports.

Nevertheless, the announcement will still be placed outside of the palace, as it is tradition.

Then Comes The Grandeur

After the births of both Prince George and Princess Charlotte, there were some literal fireworks. According to Marie Claire, there are gun salutes all over the country. Specifically, there's a 62-gun salute from the Tower of London and a 41-gun salute at Green Park near Buckingham Palace. As the BBC reported, the gun salutes "mark special occasions including royal birthdays and births, and state visits," and there's a protocol for how many shots should be fired.

Then Comes The Grand Entrance

Almost everyone can remember the day they say Middleton and Prince William emerge from the Lindo Wing at the hospital, carrying their firstborn, Prince George on July 22, 2013. And of course, when Princess Charlotte was born May 2, 2015, the happy couple was again photographed outside the hospital, holding their next bundle of joy.

So, royal-watchers should expect to see the same photo opportunity with the birth of royal baby number three, signaling another adorable addition to the happy royal family.